Jurisdictional and Immunity Issues in the Story of Enrica Lexie :A case of Shoot & Scoot turns around!

Patrons desert KSRTC’s ladies’ only service in Kochi, The Hindu

“France will stay in Mali as long as necessary” declared French President Francois Hollande on 2 February 2013 at Bamako, capital of Mali, during his one-day visit to the country. He arrived here after the French-led military operation ‘Serval[1]’ successfully pushed back the alleged Islamist fighters belonging to Ansar Dine and Movement of Unity and Jihad in Western Africa (MUJWA) and took control of the main population centers in northern part of the country including  Konna, Gao, Timbuktu and Kidal. The French administration justified the military intervention in its former colony by citing the 20 December 2012 UN Security Council Resolution 2085; however, the UNSC resolution called for an African-led Economic Community Of West African States (ECOWAS) military mission to Mali and not for a unilateral French-military action. Meanwhile, the French authorities at various occasions highlighted the need for such a military action due to the threat posed by an Islamist takeover of Bamako and the possibility of using Mali as a base to launch attacks against Europe, France and the French interests in Africa.

Since the beginning of this operation, several terrorist groups in the Sahel region threatened retaliation against the French interests in Africa. Omar Ould Hamaha, an Islamist leader based in Mali told French media that Hollande’s government has “opened the gates of hell” and has fallen into “a trap worse than Afghanistan”. One of the immediate blowback was the hostage crisis that began on 16 January at the Tigantourine gas facility near In Amenas in eastern Algeria, which resulted in the death of at least 39 foreign hostages. The gas facility was taken over by around 40 terrorists, who entered Algeria from Libya and northern Mali. The hostage crisis ended after several waves of military assault carried out by the Algerian Special Forces between 17 and 19 January. In a similar incident, but on a smaller scale, seven members of a French family were kidnapped on 19 February from the northern region of Cameroon by suspected members of Nigerian Islamist terror group ‘Boko Haram’. The perpetrators of both these operations stated their actions as a response to the French offensive in Mali. These two incidents provide a glimpse of the complexities of the presence of Islamists terror outfits and similar other groups in the Sahel region and in Western Africa. Furthermore, these events further indicate the quagmire that France has created in Africa over the recent years.

French policymakers have always believed that for France to remain in the concert of nations as a mid-size power, she must project a certain degree of power outside her borders to acquire and maintain a zone of influence which could become source of supplies of strategic raw materials in order to achieve her grand foreign policy design[2].  This has been the backbone of French foreign policy in Africa since the 19th century. Even today, France continues to be one of the most influential powers in post-colonial Africa, especially in the Francophone African region, and is also the largest European investor. The two main factors which have successfully helped France in maintaining its presence and influence among its former colonies are: 1) French language and 2) CFA Franc common currency.

During and after the Cold War, France maintained a special focus on Africa and various French administrations publicly addressed Africa as France’s backyard and its desire to maintain this status quo. This was further highlighted at a speech delivered by the French Ambassador to the US, François Bujon de l’Estang, in February 2000 at the US National War College. Ambassador Bujon de l’Estang opened the speech by calling the Mediterranean-Africa-Middle East regions France’s “backyard,” which is of vital importance to the state.[3] At least until 2000, most of the infrastructural development, mining and other economic activities in Francophone Africa were controlled by the French multinationals. Furthermore, as part of its African strategy, France maintains at least two permanent military bases in the continent including in Djibouti and Gabon and several other temporary bases and operations in other countries, making it the only external power to have this scale of military presence in Africa.[4] These deployments have been justified by various French administrations as crucial to maintaining peace, security and stability in the region and to protect the French interests and its nationals in the African continent. 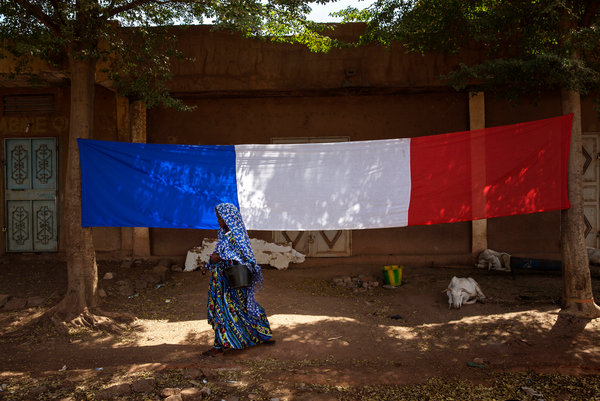 France, through various bilateral agreements, has successfully maintained a special power status among most of its ex-colonies. This is highlighted through various French initiatives on different fronts including, economic and political relations; military agreements; technical and educational projects. However, over the past decade, the increasing influence of emerging powers like China, India and Brazil in Africa has introduced a new type of competition for this continent. The emergence of new powers in the African scenery has been commented by many scholars as the decline of the Western and the French influence in Africa. The French frustration over loosing influence in its traditional backyard has resulted in projecting this new trend as neo-colonial ambitions of the emerging powers in Africa. However, the economic looses that the French multinationals suffered in Africa in recent times only hardened the French government’s resolve to give a thrust to its political and military presence in Africa.

The operation Licorne carried out in Cote d’Ivoire in support of the newly elected president Alassane Ouattara in 2011 against ex-president Laurent Gbagbo was a classic example of France’s determination to continue with its Realpolitik in Africa. In addition, the French support of former Libyan leader Colonel Muammar Gaddafi and later his disposal by providing logistical, financial and air support to the rebels during the Libyan crisis in 2011 could be regarded from the perspective of maintaining a strong presence in Africa. These military and political interventions can also be viewed as part of the France’s “Grande Strategie” to secure its chasse gardeé[5] and to limit the growing cooperation and influence of new players in Africa, especially that of China.

*Chacko Philip is an independant consultant on Intercultural management and Security risk analysis. He is also a visiting lecturer on “Geopolitics” & Globalization and India” at management schools in Lyon and Grenoble. He can be reached at  strategicbriefings.com

[1] Operation Serval was launched on 11 January 2013 involving French and Malian troops on the ground. The French contingent involves at least 400 troops along with attack helicopters, armored vehicles and ground-support operations carried out by the French Air Force.  Countries providing logistical support for the operation includes Chad, UAE and several Western countries including, Spain, US, UK, Germany, Belgium, Denmark, Netherlands, Canada and Sweden.

[5] Chasse Gardeé can be translated as ‘exclusive territory’ or ‘hunting ground’.