Expansion of RIMPAC Exercises to include Indian and Chinese Navies: An Assessment

In June 2013 Chinese State Councilor Yang Jiechi announced that China will attend the Rim of the Pacific Exercises in June 2014.Yang made the announcement after the summit between US President Obama and Chinese president Xi Jingping[1]. According to the recent press release from the White House, India too would be participating in the 2014 exercises along with countries such as China and Japan[2]. The decision to include India as well as China in the largest naval exercise may well be an important step in the strategic relation between emerging powers and the US.

RIMPAC is a joint naval exercise conducted in the Pacific Ocean by the US Pacific command in the Hawaii islands. The exercise was first held in 1971, and has been conducted once in every two years. The navies of various nations such as UK, USA, Australia, Thailand, Chile, Canada, New Zealand Indonesia, Japan, Malaysia, Netherlands, Peru, Singapore, South Korea, Thailand and  France have been participating in the biennial exercises. The Initial purpose of the exercise was to challenge the Russian presence in the pacific area. With the end of cold war nature of threats has also undergone transformation. The purpose of the exercise has diversified to anti-terrorism, anti-piracy and disaster relief.  Main aim of the month long multi-lateral exercise in the current era has been to develop and enhance the interoperability of various navies, so that they can work together to promote stability and security in the region. Accordingly navies have been striving to work together in order to secure the maritime domain and enforce the maritime laws and to secure sea from piracy and terrorism. 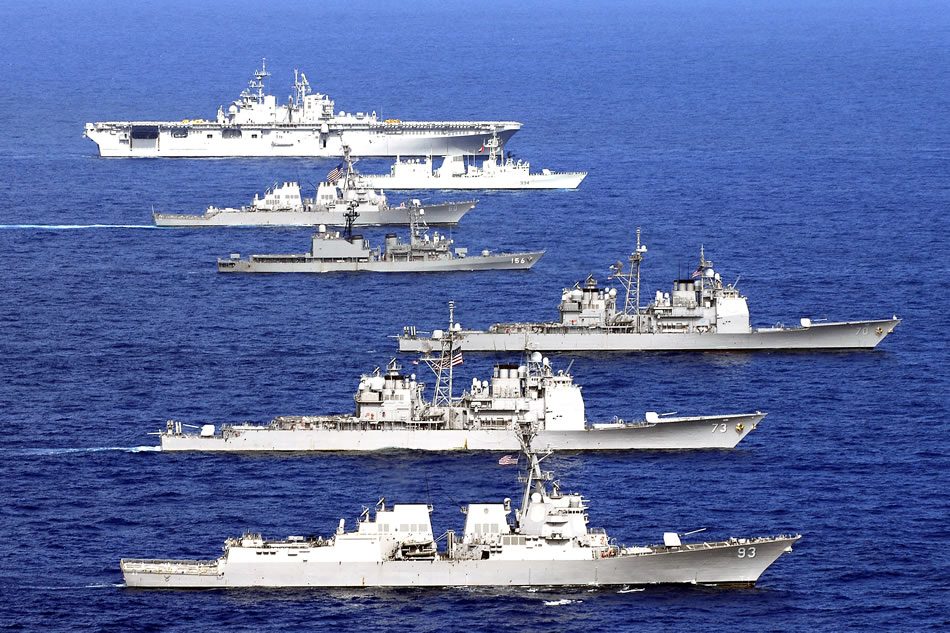 The 2014 RIMPAC will likely be attended by 22 countries with 40 ships, submarines and more than 200 aircraft. According to Carl Baker, Director at the pacific forum centre for strategic studies “RIMPAC which started as a confrontational containment sort of exercise, aimed at the deterrence of Soviet Navy from the Asia-Pacific region has evolved into various other scenarios such as disaster relief and anti-piracy operations RIMPAC is also a sort of vision of the US Navy on US perception of naval warfare in the modern day”[3].

RIMPAC and the Indian and Chinese Navies

India had participated in the 2012 RIMPAC as an observer, but did not send any warships. The decision to reportedly participate in RIMPAC-2014 may be constructed as a major shift in policy by India, which, otherwise has kept away from actively participating in such multi-lateral exercises.  India since its independence till the 1990s concentrated on the nation building process and to establishing a strong economy. It was in the 1990s that the country started enhancing its maritime capabilities in the right earnest. India is in the process of acquiring an aircraft carrier INS Vikramaditya from Russia, as a replacement of existing aircraft carrier INS Viraat and is building an indigenous aircraft carrier INS Vikrant. India plans to have two aircraft carrier groups by the end of decade. The Chinese decision to join the RIMPAC may also have spurred New Delhi’s decision to join the US hosted multi-lateral exercise.

China too has a similar story. After securing the home front and establishing a strong economy, China has started to spread its influence beyond its immediate neighbourhood. China has been rapidly modernising its naval fleet and has operationalized aircraft carrier Liaoning which it acquired in decommissioned state from Ukraine. Both India as well as China have started ambitious naval modernisation program rapidly, trying to acquire comprehensive blue water capability. The invite for RIMPAC is the recognition by Washington that India and China are in the process of maturing as maritime powers, and have the potential to contribute to the international maritime order.

With modernised blue water navies both India and China would be able to bolster their efforts in naval diplomacy and in turn, bilateral relations with nations beyond their immediate neighbourhood. India and China have a lot to gain from participating in the RIMPAC exercises. One of the main advantages of taking part in the exercise is the chance to operate alongside other navies and get an exposure to the advanced technologies and naval practices. The multi-lateral exercise is also a platform for the navies to showcase their capabilities and to ascertain the capabilities of others in turn. This is particularly vital in case of India and China who may want to assess realistic capabilities of each other’s navies. For countries such as Japan, Malaysia and Philippines this may be an opportunity to study Chinese Navy, since they too have deep interest in Chinese affairs. The US may be hoping that the PLA Navy and Indian Navy would field the latest hardware which they have acquired from Russia so that they can carry out signature profiling and collect signal and electronic intelligence.

Washington and New Delhi can use the platform of RIMPAC to further strengthen the strategic relations. Although India and United States has been involved in MALABAR series of exercises, If India participates in RIMPAC it will be the largest multilateral exercise which it would participate till date. India needs to make use of all available opportunities to broaden the strategic ties with the US. Since nations have used naval diplomacy to strengthen the bilateral relations, the navy to navy interactions may well help in the strengthening of diplomatic relations too. The 2014 RIMPAC will have an added significance since China and India are participating in the exercises for the first time in an active manner, after the US declaration of “pivot to Asia”.

It is for consideration that despite being the strongest Navy in the world, US Navy alone cannot execute the role of global policing for an extended period of time. Therefore US doctrinal formulators have taken this limitation into consideration. According to “A cooperative strategy for the 21st century sea power (CS21)“ document, due emphasis has been laid upon expanding cooperation with maritime forces of other nations with varying technical capabilities[4]. The requisite interoperability skills will of course require high level of coordination amongst navies. In this scenario exercises such as RIMPAC has added significance, since one of the main aims of RIMPAC is to increase interoperability. By increasing the navy to navy interactions, US seek to enhance its maritime domain awareness by forging partnerships with world’s maritime forces. It is in this scenario that China as well as India fit to US plan, where regional powers can be agents of stability and partners in maintaining maritime security. The increased interaction between the navies may also help remove any misconceptions and mistrust between countries.

US also want to have a continuous military to military engagement with China. The Former defence secretary Leon Panetta has been quoted as saying “Our fundamental goal is to build a U.S.-China military-to-military relationship that is healthy, stable, reliable, continuous and transparent”[5]. China with its increasing assertiveness backed by strong economy and rapidly modernising armed forces is being viewed with suspicion and fear by its neighbours. RIMPAC is considered by many as first step towards integrating the Chinese Navy into regional disaster preparedness and building working level linkages with other navies.

Although China’s participation may not resolve the political differences between Washington and Beijing or between Beijing and its neighbours, it can be a significant platform to build trust. The invite to China for RIMPAC itself has sparked a debate among the political leadership in Washington questioning the wisdom of the decision. Some critics say that the Chinese participation will send wrong signals to the US partners in the region, who will get worried about the perceived warming of relations between Beijing and Washington.  Taiwanese analysts aver that US congress members have asked for participation of the Taiwanese Navy too in the multilateral exercise as a gesture that Washington has not forgotten its allies in the region[6].

RIMPAC has evolved over the course of more than 40 years. From being specifically aimed at meeting conventional threats, it has started to take into consideration the non-traditional aspects such as piracy and humanitarian assistance. It has evolved according to changing threats and needs of maritime domain in the 21st century. RIMPAC is also a stage for naval diplomacy to prosper. For the countries in Pacific area, achieving interoperable capability is very important since the region has experienced natural disasters of big proportions such as the Tsunami of 2004. So when the next opportunity for humanitarian assistance arises the navies would be able to work together in efficient way to bring about synergised response. In the coming years, importance of RIMPAC will only increase with shift in US policy towards Asia-Pacific and the relevance of non- traditional threats to security in the maritime domain.

In this context the prospects of both the Indian and Chinese Navy participating in RIMPAC exercises has the potential to create a win-win situation not only for India and China but also for the global maritime community.

* M.A Athul has completed his MA in Defence and Strategic studies from Madras University and is currently based out of Bangalore

[4] A Cooperative Strategy for the 21st century Sea Power: available at http://www.navy.mil/maritime/maritimestrategy.pdf       accessed on 31-10-2013