Dr Happymon Jacob to deliver the 5th CPPR Quarterly Lecture on ‘Indo-Pak Relations: What lies ahead?’

Proceedings of the International Conference on National Security

– Perspectives from India and the United States 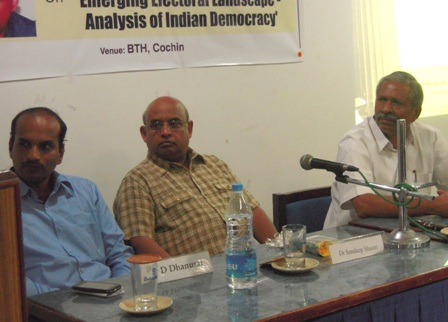 National Security has emerged as a key topic of discussion worldwide at all levels of society, especially over the last two decades. India and the United States of America are two major nations which face myriad security challenges on a regular basis and numerous parallels have been drawn about the similarities and differences of the political and social structures existing in both countries and how they have been strengthened and weakened by their respective democratic federal structures. It is being considered essential to conduct relevant dialogue sessions and discussions about the various threats and attacks both countries have already faced and the risks their security apparatus may be vulnerable to in the future, as also the reasons which might influence the same. This is primarily to enable the formation of a shared knowledge base which can prove useful in the analysis and deconstruction of these various security related issues and how they can influence the creation of relevant polity and policy while these factors are kept in mind for the future.

The Centre for Strategic Studies, the newly formed wing of the Centre for Public Policy Research, was considered as an ideal facilitator by the United States Consulate based in Chennai, to enable the conducting of an International Conference on National Security Management. Renowned scholars, former intelligence and security personnel as also academicians from both India and the United States were invited to engage in a dialogue on this pressing topic which is deemed as an essential need and call of the hour.

Diverse insights and perspectives were obtained from the lively discussions which were conducted on the first day of the conference, where talks were centered around three themes, namely ‘Perceptions, Notions and Dimensions of National Security in a Federal Setup – A Tour D’ Horizon’,  ‘Typologies of the National Security Debate: Economic and Societal Issues’ and ‘ Regional Security Dynamics: Environmental and Community Concerns’

1)      Internal Security and Role of States in the Federal Structure ,

2)      Role of federal states in changing geopolitical dynamics of Asia

3)      Role of federal states in changing geopolitical dynamics of Asia

Each group engaged in discussions leading to constructive arguments which were later presented by them. Mr Padmakumar IPS chaired the session and gave concluding remarks about tactical issues faced by US and India and the differences in combating them due to the diverse nature of Indian population.

The papers presented and the debates they provoked encompassed a wide range of security related subject matters, providing the discerning audience with fresh and unique insights on the challenges and successes in the global security arena over the past few years, and these narrations were further embellished by the fact that they represented the viewpoints from two different hemispheres, each saddled with its own security issues.

The following were the salient issues that emerged out of the deliberations as a part of the International Conference.

The major observations made were mainly in the context of the geopolitical challenges and how India will need to place itself. Undoubtedly, India and the United States will need to make a concerted effort to address the concerns and needs of security. The bilateral counter-terrorism effort, in terms of intelligence sharing, needs to be strengthened for better coordination and to address the severe threat. There is a need to intensify bilateral cooperation in every sphere.