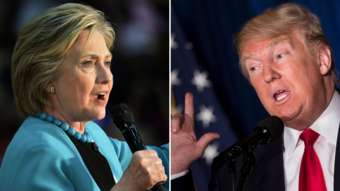 The US presidential election 2016 has been the most polarising, uncivil and negative in recent times.The divergent positions of the parties and candidates on various issues offer different solutions to the problems and visions about the future of America. Economy, immigration,foreign policy,national security and terrorism, race, trade and gun control constitute the most widely discussed themes of this election.Education, health, environment, abortion, treatment of racial and ethnic minorities and rights of gay and transgender also concern the American public.

Economy has been an important and divisive issue in all US elections. According to the Pew Research Centre Survey conducted in June 2016, overall 84 per cent of registered voters say that the issue of economy will be very important to them in making their decision about who to vote for in the election.What make economic problems distinct during this election are the difficulties of gross inequality and economic stagnation experienced by most of the American population.The economic issues are spread over household income, taxes, jobs and other related concerns. There has been no meaningful recovery in household income as the wages have been stagnant since the recession. This is despite the fact that the American economy has improved impressively under Obama.The Census Bureau reports on income and poverty found that real middle-class incomes in America grew a phenomenal 5.2 percent, and that the poverty rate fell by the largest percentage in nearly 50 years. Trump’s economic plan promises to create 25 million new jobs and grow the economy at an annual rate of at least 3.5 percent.He described the plan as “the most pro-growth, pro-jobs, pro-family plan put forth perhaps in the history of our country”. But in reality, Trump does not have a clear-cut plan. Increasing middle class income is the central idea of Hillary Clinton’s economic plan.

Hillary Clinton proposes to raise taxes on the top 1 percent of earners – those earning more than US $732,000 a year – while largely leaving tax rates the same for taxpayers with smaller incomes, new standard tax deduction for small businesses,additional deductions for start-ups and removal of tax breaks for companies that send jobs overseas. Donald Trump supports significant business tax cuts, reducing the number of income tax brackets and cutting taxes at all income levels, with the largest benefits going to the highest-income households.Jobs remain a top priority for Americans even as the unemployment rate in the US returns to pre-recession levels. Since October 2015, unemployment has hovered close to 5 percent. Hillary Clinton advocates for investment in American infrastructure as a means of creating ‘good-paying’ jobs and increasing wages. She proposes special job plans for the disabled.Trump has a nationalist economist agenda to bring back jobs.He opposes outsourcing, further trade liberalisation, including Trans-Pacific Partnership (TPP), and stands for stricter visa controls.Both the candidates propose to bring back outsourced jobs,particularly in the manufacturing sector.The politico-Harvard poll shows 85 percent of Republicans say that free trade has cost the US more jobs than it has created, compared to 54 percent of the Democrats.
Green Party nominee Jill Stein wants a more progressive tax system and supports tax reform that helps create jobs, economic efficiencies and innovation and opposes tax favours of corporate and wealthy interests. Libertarian nominee Gary Johnson has proposed federal consumption tax, considers job aright and proposes to write off student debt.

Next to economy,80 per cent of registered voters consider that the issue of terrorism and internal security will be important to their vote. This is a major point of contention between Hillary and Trump.Trump proposes the use of tactical nuclear and other weapons on ISIS,surveillance of mosques and closing them,if needed, a ban on entry of Muslims into the US and even torture as a means to elicit information from terrorists. Hillary refuses to hold responsible the entire Muslim community for terror strikes and proposes to fight home-grown terrorism with the help of the members of the Muslim community.On immigration, in contrast to the Democratic Party’s proposition for comprehensive reforms with a pathway to citizenship,Trump plans to deport all illegal immigrants and build a wall across Mexico to ban further entry.According to the Pew Research Centre Survey,70 per cent of registered voters say that immigration is very important to their vote, up from 41 per cent in September 2012 and 54 per cent in May 2008.

Consequent to recurring gun violence and killings,gun control is more important now than the previous two elections. Every year, more than 30,000 Americans have their lives cut short by guns. The Democrats stand for effective background checks and control over guns to make dealers, manufactures and users responsible. For the Republicans, gun wielding is sacrosanct conventionally and constitutionally. With growing incidents of police atrocities against blacks,hardening positions on immigration and fear of national security, race is increasingly an important issue. Hillary proposes to implement a set of best practices to prevent police-involved shootings.Trump himself is accused as racist because of his remarks on Mexicans as rapists, Muslims as terrorists, questioning the integrity of minority judges hearing Trump University cases and his early attitude towards blacks.

Hillary supports free college education through state and family funding, whereas Trump leaves it to the states to adopt appropriate local policies. Unlike Trump, the problems of women, disabled, gay, lesbian and transgender people are given more attention by Hillary.High pricing of new and generic drugs is a major election issue. Trump wants to repeal Obama Care (Affordable Care Act)and reform healthcare based on free market principles.The Democrats support the Act, promise to protect it or move to a more generous programme. They support combating climate change and have endorsed the Paris agreement. Trump considers global warming a hoax, opposes the Paris agreement and wants to cancel the Climate Action Plan and keep the oil and gas industry free from environmental regulations.

These issues and themes are apparently quite normal and positive during elections. However, what makes them unique, and to an extent alarming, is the failure of the major political parties to address them and theentry of class and identity politics with a dangerous mix of racial and narrow nationalistic overtones in the election campaigns.

The Republicans have been principled advocates of economic liberalism: free markets, free trade and open immigration. They supported trade legislations such as the North American Free Trade Agreement, recent trade promotion authority,bank deregulation that caused the financial crisis of 2008 and tax reduction for the wealthy. They stood for undermining the power of labour unions and reducing social services for the poor. These policies run counter to the interests of the working class. There is a big conflict within the Republican Party between wealthy business interests and poor working class. In this fight, the working-class base expresses a clear preference for more nationalist economic policies.The Democratic Party,traditionally seen as a party of the common man,has also embraced pro-market polices and business interests, free immigration, complicity in bank de-regulations and ignored labour concerns. But the more important problem with the Democrats related to this election is that the party has embraced identity politics as its core value.

These development shave two important consequences –one, division within the mainstream political parties between the elites and the rank and file and two,the return of class and identity to US politics with undercurrents of white nationalism and racialism.

The division within the mainstream parties has resulted in passionate support for the socialist positions of Bernie Sanders during the primaries, ground level support for Trump among the white working and middle classes, irrespective of the position of the party leadership,the perception that Hillary Clinton is with the powerful and wealthy,the influential presence of Libertarian and Green party candidates in the electoral fray, and the negativity about the mainstream candidates. Simultaneously, it also reflects the conflict of opinions and themes, and the decay in the US political economy. The influence of third party candidates explains a lot. Unlike presidential elections of the past two decades,Libertarian nominee Gary Johnson and Green Party nominee Jill Stein attract a considerable section of people, particularity the young.The drift of young voters towards the third party candidates has alarmed the Democrats.

The second factor,the return of class to American politics with a mix of white,black and minority identity and nationalism has greater and deeper implications. It is made to believe that the white as a class is losing to other sections in the larger economic and political arena. The embrace of identity politics as its core value by the Democratic Party has distanced white working class from it. The white working class perceives that Obama Care was designed to benefit other groups of people.The recurring incidents of terror strikes in the US and Europe have generated a sense of insecurity, particularly among sections of whites. Donald Trump trumpets that the whites are losing their country because of liberal immigration,refugee policies and complicity with Islamic terrorism. That is why, in a Quinnipiac University survey,80 percent of Trump’s supporters polled said they felt that, “the government has gone too far in assisting minority groups,” and 85 percent agreed that, “America has lost its identity”.

The racial and nationalist colour of the debate on various issues has created a situation of white vs. black and multiculturalism vs. identity politics. Some Trump supporters go to the rhetorical sloganeering of‘Make America White Again’.Trump has succeeded in defining all the problems faced by America in the framework of white nationalism, identity politics and insecurity. Suffice to say, irrespective of the outcome of the election,the economics and politics of the themes and issues discussed during the campaign will have a lasting impact on US society, economy and polity. The polarising positions, slogans of narrow nationalism and racism and pessimistic narratives of future are eating into the very roots of American multicultural values and constitutional ethos with dangerous ramifications for the US in particular and the world at large.

*Josukutty C.A. is Assistant Professor at the Department of Political Science, University of Kerala.

This article is a reproduction of the presentation done by the author at the International Conference on US Presidential Election 2016 organised by CPPR-Centre for Strategic Studies. Views expressed by the author is personal and does not represent that of Centre for Public Policy Research.