Kerala should discard its redundant laws, says CS, The Times of India, January 23,2016

IMANI Alert:  How Realistic is the Action Plan for Achieving India-Africa Forum Objectives?

The Summit concluded with the parties agreeing to formulate a detailed Plan of Action (POA) and the modalities of monitoring mechanisms within three months of its culmination. As the first month of 2016 comes to an end, it marks this ‘three-month’ deadline set during the IAFS Summit.

The POA holds significance as it outlines the procedure to achieve the goals set out by the parties in the Summit Framework[1]. It therefore becomes essential to prepare a prudent and feasible POA to ensure successful execution of the Summit Framework. This article examines the various parameters that ought to be considered in the POA 2015 and foresees some of the difficulties that could arise while implementing the Summit Framework.

POA to be aligned with African Countries’ Development Plans

The goals set in the Summit Framework are aligned with the African Union’s Agenda 2063 (a 50 year plan) and with the global Sustainable Development Goals (SDGs) 2030. This is to ensure consistency and feasibility in executing goals, taking into consideration the interest of all 54 African nations.

The chart below depicts different national development plans in each of these countries. 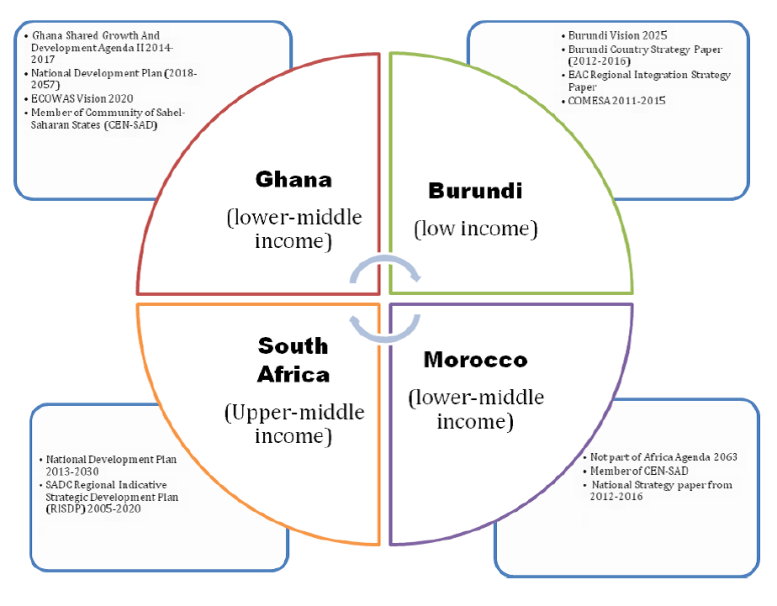 Taking Ghana’s development plans into consideration, it can be noted that although they possess similar goals, such as to improve the agricultural sector, achieve gender parity and to develop and improve technology and ICT, all have different timelines, which could lead to confusion of the actual timelines for implementation.

Whereas, in the case of Burundi, which has only recently recovered from a long civil war, it was the third poorest country in the world in 2014 and only documented their first national action plan in 2005.   It would be rather ambitious for Burundi to merge all the aims of the RECs as well as develop a strategy for Indian partnership and would require careful planning of its limited resources.

Being part of the Arab Maghreb Union (AMU) and not part of the African Union, Morocco’s national objectives aren’t necessarily aligned with Agenda 2063, which goes against the fundamental idea of aligning the Summit Framework goals with Agenda 2063.  Further, Morocco, as part of the AMU has tensions with another member country, Algeria, over the West Sahara region, so much so that a summit between the five member countries has not been possible since 1994.  The historic rivalry between nations could be something that India has to be sensitive to when investing in these countries[2].

South Africa, a member of the Southern African Development Community (SADC), has to manage its National Development Plan (NDP) from 2013-2030. The SADC has a Regional Indicative Strategic Development Plan (RISDP), which will be implemented from 2005-2020, aimed at increasing integration between its member states. South Africa, and other countries, may be focused on intra-continental relations in the coming years, leaving over relations, such as India, feeling boxed out.

These are just instances of four countries. Juggling all the various needs of 54 African nations, who have different income levels, are in different regions, have different resources, conflicts within and among themselves, and all follow at least two development plans will be tricky for India, especially since all the development plans have different timelines and slightly different, specific, regional needs. There are also other Regional Economic Communities, not recognized by the AU, which may also have their own development plans that need to be taken into consideration. This difficulty could be compounded further by changes to the political atmosphere of each country, as each incoming or incumbent political party may want to develop their own policies and disregard previous policies, even if they are beneficial.

It is yet to be seen how effectively the POA addresses these concerns and captures the peculiar interest of African countries.

To Avoid Repetition of Loopholes from Previous POA

Prior to IAFS 2015, two Summits have been held: first IAFS was held in New Delhi in 2008 and second IAFS was held in Addis Ababa in 2011. However, only the copy of POA for 2011 Summit is available on the official website[3].  Review of the past POA aided in scrutinizing the strategies adopted to execute earlier IAFS Framework and to look out for any loopholes contained in it.

POA 2011 was flawed. It was merely a broad guideline document which lacked any effective actions such as strategies to execute the goals or timelines to achieve the goals or specific roles and responsibilities of parties or allocation of budget for each goal or a method to monitor the progress of POA execution.

In short, POA 2011 was an ambiguous layout with no clear vision. For instance, one of the goals under Economic Co-operation stated that ‘India will develop ten vocational training centres in Africa’. Here, the usage of Africa is elusive, as Africa comprises of 54 countries. Which 10 out of the 54 countries are being referred here? Further, what are the criteria to select 10 countries out of the 54? Can more than one training centres be located in one country? All these questions remained unanswered.

The reference of the party as ‘Africa’ is followed throughout the POA 2011 without any further details as to which specific countries are being referred. In another instance regarding the financial commitment, it is stated in the POA that ‘India announced a separate provision of 500 Million USD to develop capacities in Africa’. Again, there are no details as to what capacities are being referred or which African countries would get a share of the 500 Million USD or what share of the budget is allocated for each of those African countries.

During the 2015 Summit, India pitched for nearly 9 Billion USD in Lines of Credit to African countries over a period of 5 years. It is expected that POA 2015 would not be as disappointing as its predecessor with regards to details and layouts.

POA 2011 was prepared for a period of 4 years with a promise of constant review, adaptation and enhancement during and after that period. However, no review document is available on the official IAFS website tracking the progress of the execution of IAFS 2011 Summit Framework. This has made it unclear as to whether any review meetings were held in the past or which goals have been achieved or which goals have faced hindrance in execution. In turn, this prevents one from formulating the exact outcomes of IAFS 2011.

Perhaps, the unsuccessful review attempts in the past led to the reconsideration of including a robust monitoring mechanism in POA 2015 and it is a welcome move. The Summit Framework 2015 specifically assures to set up a formal monitoring mechanism to review the implementation of the Framework goals by a competent body.

A constant and efficient feedback system is essential for ensuring successful implementation of the Summit Framework.  The working structure to be developed to form the monitoring panel should be closely observed. How are African nations going to be represented?  Should this be based on a project-by-project basis or based on geographic location? The frequency of the panel meetings and the method adopted to monitor the actions of 54 nations of Africa and India is something to wait and watch.

In conclusion, for an effective POA to be produced from this Summit, both India and all the African countries  have to be cautiously conscientious of the all the details of the deal and attempt not to neglect any country or issue, as this could lead to a downfall in the future success of this partnership.