“Nitaqt is a misunderstood word” His Excellency Dr. Saud Mohammed Al-Sati, Ambassador of the Kingdom of Saudi Arabia in India

The rising public support for the monthly Public Transport Day in Kochi saw a host of senior government functionaries commute by public transport and bicycles to work and back on Friday.

They included District Collector K. Mohammed Y. Safirulla, who rode a bicycle from his camp office to Maharaja’s College metro station and travelled by the metro up to Kaloor and took a private bus from there to the Collectorate at Kakkanad.

On their part, Mayor Soumini Jain and Hibi Eden, MLA, relied on a bus to commute to an old-age home at Thevara to inaugurate a new building block. They were accompanied by A.B. Sabu and Gracy Joseph, chairpersons of the corporation standing committees for welfare and development. All of them returned by bus, shunning their official vehicles.

Speaking of the campaign, D. Dhanuraj, chairman of the city-based Centre for Public Policy Research (CPPR) said: “This is a platform where civil society organisations, government officials, and transport providers of Kochi unite to promote and better public transport in the city.”

Public Transport Day is a yearlong campaign of Kochi Metro Rail Limited (KMRL) and CPPR, as part of which the first Friday of each month is set apart to create awareness and promote reliance on public transport among Kochiites.

The day saw a host of others rely on public transport and walking, defying the summer heat. “I had a bus ride to my office. I did not go home for lunch, avoiding a trip. Also, my driver has a holiday. Thinking of a 3-km walk back home,” said architect S. Gopakumar, who is also president of Better Kochi Response Group (BKRG), an NGO.

The day also saw a medical camp partnered by Kochi Bus Transport Association (KBTA) at the Aluva bus terminal. Anwar Sadat, MLA, inaugurated the camp. Around 200 bus crew members attended the camp which was co-hosted by Aster Medcity. The results showed that 26.7% of them had high blood pressure, while 15% of them suffered from lung problems.

Later in the day, a function was held at Menaka to hand over the Shreshta Sanchari Puruskaram to the most frequent metro commuter. The event was partnered by the Kerala Samsthana Vyapari Vyavasayi Ekopana Samiti. KMRL MD A.P.M. Mohammed Hanish was the guest of honour.

The constitution of seven private bus companies in the wake of a fall in patronage for buses on several routes and KMRL’s proposal to announce further discounts for regular commuters are seen as signs to woo people from private vehicles to various modes of public transport.

The metro agency’s proposal to encourage electric autorickshaws on the metro’s feeder routes and the ambitious Water Metro project that is on the anvil are seen as a shot in the arm for public transport. 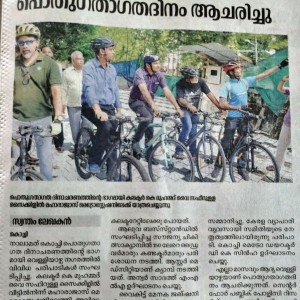