Progress not likely for 2-3 Yrs in Indo-Pak Peace Talks, The New Indian Express

The quandary of food security

Centre for Public Policy Research hosted the 5th edition of its Quarterly Lecture Series on the topic, ‘Indo-Pak Relations: What lies ahead?’ on Monday,23rd December, 2013 at Ernakulam Press Club,  Cochin, Kerala, India

The major points of his lecture are :

– There is a Complete lack of enthusiasm in New Delhi towards initiating and maintaining peace talks with Pakistan. India has a certain arrogance emanating from its dominant position in South Asia.

– Indian Government has modified its defense systems after humiliation of various attacks such as the one in Mumbai, is militarily prepared to take on Pakistan; academic thinktanks in New Delhi constantly proclaiming an Indian victory if a nuclear war takes place. However, India and Pakistan will both be heavy losers in such a scenario.

– India and Pakistan don’t have a crisis de-escalation policy; both do not know what steps to take in times of

– Also, a false belief and sense of security exists that USA will always be there to diffuse tensions – Dependent on outsourcing of crisis de-escalation. This isn’t an ideal strategy because US has its own interests and won’t come to aid every time.

– Hope is the main defense strategy of India in its relations with Pakistan due to immaturity on both sides.

– India cannot afford to look at Pakistan as any other state, Pakistan extremely complex, not a rational unitary actor; no predictions can be made about its behavior.

Doesn’t make sense about how these two perceptions co-exist but they do. A deeper understanding is thus essential.

– In Pakistan, wounds of 1971 war still remain; loss and creation of Bangladesh still a bitter memory.

– Indo-Pak relations unique as the tensions are characterized by a nuclear dimension – But only India has spelled out its nuclear doctrine so far, Pakistan yet to do so – This is a common policy of weaker states to confuse the dominant ones.

– Indian foreign policy heavily influenced by media and civil society perceptions – even if Indian state wants to indulge in dialogue with Pakistan, it ultimately bows down to anti-Pakistan pressure.

– According to Pakistan, Indian army has indulged in all the violent crimes it accuses the Pakistan army of.

– India and Pakistan should learn from Cold War crises – Indian military and spy chiefs never meet or hold talks – US and USSR chiefs use to and this has helped avoid many major crises.

– Despite hostilities, nuclear detonations unlikely between India and Pakistan.

– Onus is on India as a major power to initiate talks and indulge in discussions but it has been unwilling to do so thus far. India has only been focusing on trust deficit and never at an incremental approach. Pakistan is unhappy with the Indian attitude.

– Basically, no progress should be expected in peace talks or Kashmir strategy for next two-three years atleast.

– Pakistan’s main concern with regard to Kashmir is water, not even the Kashmiri’s. Severe water crisis in Pakistan, heavily dependent on water from Kashmir, fears India might violate the Indus water treaty. Politicization of water taking place in Sindh and Punjab. Pakistan thus sees it necessary to keep heat on Kashmir so as to ensure India doesn’t silently violate the water treaty.

– In India, the middle class and elites generally doesn’t care if the Pakistani State eventually does implode – However this attitude needs to change as there is high chance of Pakistan turning into a ‘nuclear Somalia’ – India cannot afford to have such a neighbor next to it and should take a deeper interest in understanding Pakistan.

– India media needs to rethink its own policies – is in a better situation than it was in the 1990s and thus many views are spread as opposed to earlier – both good and bad aspects of media influencing policy towards Pakistan – need to focus on good and ultimately help develop a more open mindset towards Pakistan among Indian public and ruling class.

View the images from the lecture below: 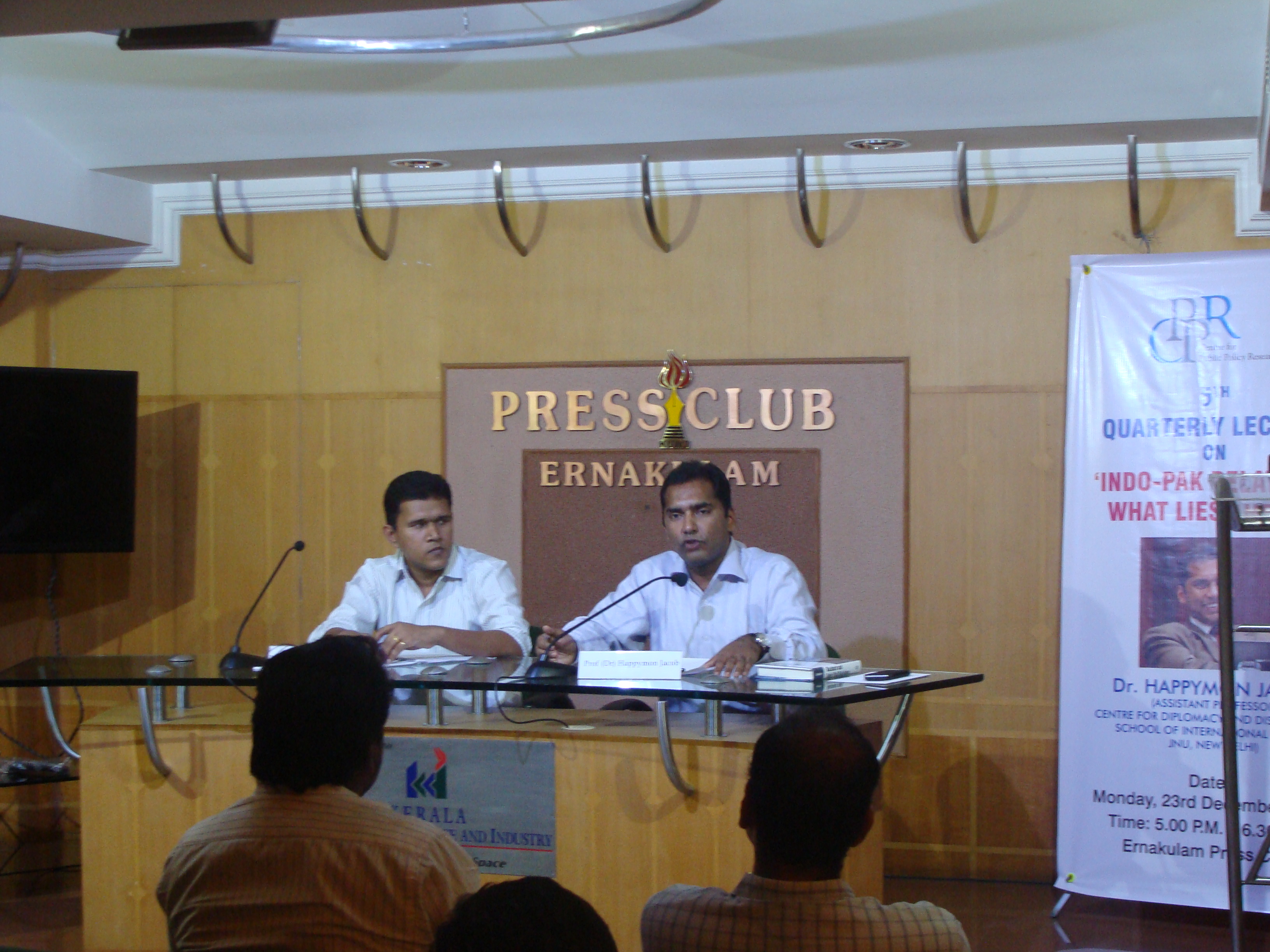