Study on achievement level of 6th standard students in Kerala

The Emergence of India in the Africa Rising Anecdote; a Game Changer? 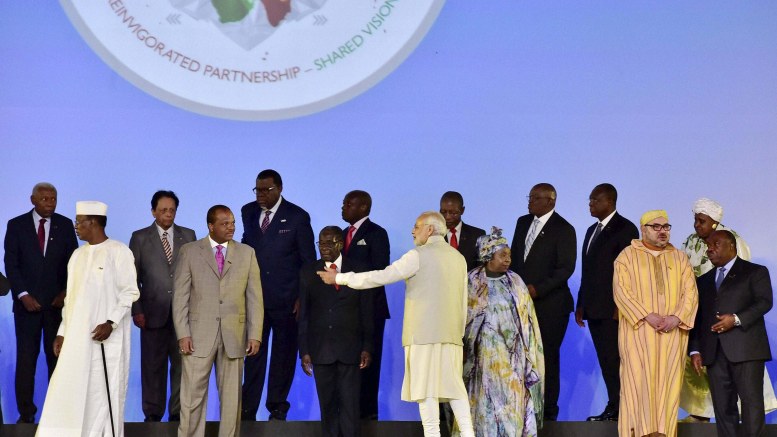 By Alena Wabitsch and Brian Dzansi*

The third India-Africa Summit recently held in New Delhi, created history by being the largest Africa summit ever held in India. Based on a common history of colonialism and good relations established by earlier political leaders, the past and future of the India-Africa partnership was extensively discussed. Yet, the media in Africa has been surprisingly quiet about it, seemingly lacking imagination of Africa’s role in a successful partnership.

What drives the partnership?

India is the ninth largest economy in the world. According to data from the World Bank, its GDP was roughly USD 2.01 trillion in 2014[1]. India’s population (1.25 billion) is almost equal to Africa’s (1.1 billion) and its area of land is just 1/10th of the size of the African continent.[2] In 2012, trade between India and Africa amounted to about USD 70 billion. [3] However, World Bank data from 2014 shows that only 2% of exports from sub Saharan Africa to India are consumer goods, while a whopping 84% are raw materials, and the remaining being capital and intermediate goods.[4] This trend is detrimental to Africa’s dream of industrialization and self-sufficiency. Indian FDI into Africa is currently between USD 30 and 35 billion. Strikingly, Mauritius represents the top source of FDI into India by investing USD 9.03 billion in 2014-15.

It is no secret that India wants to outplay China, which is trading more than three times as much as India (USD 220 billion in 2014), and that it takes interest in Africa’s natural resources. Furthermore, India’s Prime Minister Mr. Modi, hopes for allies in the endeavour to render international institutions more representative of the world. This includes a reform of the UN and its security council.

The first India-Africa Forum Summit addressed a plethora of issues. Collaborative solutions included economic and political cooperation, a focus on science, technology and R&D, as well as cooperation in social development and capacity building, tourism, infrastructure, energy and environment, media and communication.[5]

The Declaration of the second Africa-India Forum Summit in 2011 ratified previous points and emphasized the promotion of trade and investment, as well as human resource and infrastructure development in Africa. In addition, they underscored the urgency of a comprehensive reform of the UN system to reflect contemporary realities.[6]

Many of these schemes and treaties have not yet proven very beneficial for African countries. For instance, the effectiveness of the DFTP concerning export stimulation can easily be assessed. An analysis by the International Center For Trade And Sustainable Development suggests that the benefits of the DFTP have not been significant. This is perhaps due to the exclusion of key export products. Such key export products of African LDCs (Least Developed Countries) include coffee, tea, some spices and oilseeds, milk and cream, onions, cashew nuts (shelled), tobacco, copper and related products. Exports of LDCs such as Burkina Faso, Eritrea, Gambia, Rwanda and Zambia, to India declined compared to world exports, with the sharpest decline occurring in Gambia and Zambia.[7]

How Africa can benefit from collaboration with India?

The India-Africa relationship needs to be sustainable and based on equity. The primary approach must be about sharing capability and capacity to create partnerships to deliver solutions. Some of the areas for potential fruitful cooperation are found below.

There is an urgent need for an improved healthcare system in Africa, including Ghana. Sub-Saharan African countries feature mostly at the bottom log of tables indicating health system performance such as life expectancy, child mortality and others. Africa can benefit from India’s expertise to build a robust health infrastructure and enhanced manpower in the entire continent. Currently, affordable Indian generics of pharmaceutical drugs account for around 11% of exports. Without any doubt, Africa needs to fight its way out of the dependence on India when it comes to the availability of life-saving drugs. Instead, African countries need to increase their pharmaceutical manufacturing capacities. One strategy could be partnering with Indian pharmaceutical firms to establish subsidiaries in African countries to produce affordable medicine. Presently, there are 10,500 manufacturing units and over 3,000 pharmaceutical companies in India, representing 1.4 per cent of the global pharmaceutical industry in value terms and 10 per cent in volume terms.[8] India and Africa could also benefit from collaborative research on diseases, which currently receive little attention, or the development of health care systems tailored to their populations and their specific needs. Akin to India as well as Africa is the use of alternative medicine, which offers options for research and mutual exchange of experience. Another vital area of partnership is collaboration in dealing with the influx of fake-medicines which floods the African market from India. Some form of partnership in this regard is already underway between Ghana’s technology firm mPedigree, India and other African countries using the ubiquitous mobile phone technology to tackle counterfeiting of medication. Furthermore, there exists vast opportunity to increase the use of telemedicine through the Pan African e-Network, which connects African hospitals and universities with their Indian counterparts to enable effective e-health and e-education.

Africa is power starved. Almost 600 million people in sub-Saharan Africa lack access to electricity. Only seven countries—Cameroon, Côte d’Ivoire, Gabon, Ghana, Namibia, Senegal and South Africa—have electricity access rates exceeding 50 per cent[9]. Renewables and off-grid solutions pave the way for sustainable energy supply to meet the Sustainable Development Goal 7. In addition, the dependency on grid for domestic use could be reduced for industrial and commercial purposes. To date, India has indicated plans to build a solar farm and manufacturing plant in Ghana for the sub region market and it is proposing a global solar power alliance with Africa.

India has gained expertise in the field of energy and is emerging as a major centre for renewables. Today, India is the fifth largest wind energy producer and has a solar power target of 100GW worth of panels by 2022, plus 75GW of other renewable technologies[10]. Besides the infrastructure for general energy supply, Africa is currently lacking the know-how for production, installment and maintenance of solar panels. This is substantially barring the effective use of solar energy. Hence, Africa should seize the opportunity and leverage on India’s expertise in solar energy, wind and other renewables to provide electricity to the population not connected to national grid.

India is feeding 17% of the population with less than 3% of the world’s arable land. Consequently, it had to invest substantial resources (both, human and capital) and excelled at using agriculture technologies and innovations. Today, India is able to identify, scale up, and share the agricultural development practices, technologies, and innovations that have led it to become one of the biggest agricultural producers in the world. In contrast, 25% of the world’s arable land is in Africa, yet the continent only generates 10% of global agricultural output.[11]  Despite the abundance of land with a landmass of over 30 million km2 and good climate, Africa’s agriculture is lagging behind. India could be the crucial partner to help with yield improvement and dairy development, as well as mechanization. An example of fruitful co-operation is the creation of a special rice seed under the “India-Africa Seeds Bridge” project, which leads to higher yields on African soil. At the same time, India profits from selling the seed that it designed specifically for African climate. Co-operations like these that yield win-win situations and that make the India-Africa alliance beneficial.

Ghana, similar to other African countries, needs investment and expertise to revamp its colonial rail infrastructure, as well as build new ones to link major cities of the country to facilitate trade and easy movement of people. According to the African Development Bank, restoring Africa’s aging rail networks to good operating condition would require a one-time rehabilitation effort of $3 billion[12].

Indian Railway, 150 years old, is the fourth largest rail network in the world transporting 23 million passengers every day and employing nearly 1.4 million people.  Additionally, India is also the fourth largest rail freight carrier in the world. The railway network fulfils all requirements for long-distance travel connecting rural areas to urban areas and movement of bulk commodities, apart from being energy efficient. India’s government succeeded at attracting investors by implementing appealing policies and enabling foreign direct investment (FDI)[13]. Ghana and other African countries lacking efficient rail infrastructure could benefit from India’s experience on the matter. This would simultaneously provide faster and cheaper mode of transportation, a source of employment, and attract tourism, which in turn drives the economy.

Between now and 2050, the highest growth in working age population will be in India and Africa. To tap the potential of the young, opportunity, education and skill development are key. India has capitalized its economy to become a major exporter of IT and software services. With a worth of $167.0 billion in 2013-14, service exports are India’s fastest growing part of the economy[14]. In addition, India is also the fourth largest start-up hub in the world with over 3,100 technology start-ups in 2014-15[15], which represents a major creator of jobs and is mostly driven by the youth. India’s service sector is also booming, with an annual growth rate of 9% since 2001[16]. The lack of ICT skills and the digital divide puts Africa’s youth and entrepreneurs at a substantial disadvantage. To keep up with the pace of the global economy, Africa can learn from India’s policymaking and expertise to stimulate innovation and growth in the IT service sector.

In previous years, India has already been offering the development of skills and human resources, as well as numerous scholarships to African students. To achieve the former, the Pan-African e-Network is especially useful, allowing for online courses, training, workshops and platforms for arising questions and exchange of experience. One argument India raised is the proximity of Indian and African work attitude in contrast to the competitive Chinese work culture. Nevertheless, there is still a striking difference in culture between India and African states, which cannot be neglected. Even though copying India’s work style will not be effective, there are still many things worth learning from India. Such investments in education and human resource building seem more sustainable and beneficial to individuals than previous international mining and commodity trading deals.

There is no doubt that Africa can benefit from India’s expertise. However, a sustainable and non-exploitative partnership must be built on equal grounds, having the best interest of all parties at heart. If mutual exchange and ubiquitous economic growth is achieved, the India-Africa alliance could be an important driver of the supply of power, health care, infrastructure, education, agriculture, and UN reforms. It is key that Africa does not fall back into the role of the exploited resource-provider, and instead seizes its opportunity to gain international voice.

This article is a reproduced version of the published article of the same authors in http://imanighana.com/the-emergence-of-india-in-the-africa-rising-anecdote-a-game-changer/. CPPR vests no right over the content of the article nor represents the views of CPPR.

[3] The Economic Times. 2015. “Mauritius regains top slot as source of FDI in India“ by PTI. http://economictimes.indiatimes.com/articleshow/47572644.cms?utm_source=contentofinterest&utm_medium=text&utm_campaign=cppst