Gorakhpur: When the Elephant and Cycle Trampled the Lotus

Draft of the Proposed Amendments to the Kerala Shops & Commercial Establishments Act,1960 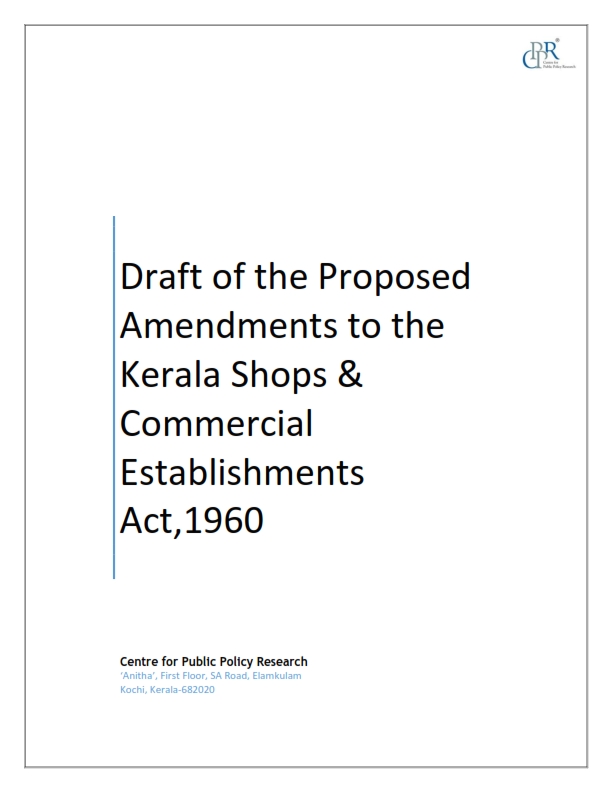 In the background of the Model Shops and Commercial Establishments Act, 2016, approved by the Government of India, Centre for Public Policy Research (CPPR) initiated a project in October 2016 to contextualise the reforms proposed in the Act in Kerala. The Model Act is aimed at improving the working conditions of employees in shops and establishments, creating more job opportunities for women in the sector and providing a favourable environment for doing business. The Shops and Establishments Act is a legislation enacted by various state governments to regulate the operations of shops and establishments in the states. The state governments are expected to amend their existing Act in line with the progressive provisions of the Model Act. The project initiated by CPPR aimed to amend the provisions in the existing Act in Kerala and bring a noticeable change in the operations of businesses in Kerala.

CPPR collaborated with the Labour Department of Kerala and representatives of the trading community, and conducted discussion forums with the stakeholders to harness a collective overview of their concerns, preferences and challenges. Subsequently, CPPR prepared a draft for the Labour Department, which includes suggestions to improve Ease of Doing Business and provide flexibility in the operations of shops and establishments in Kerala.

The proposed amendments are expected to meet the present-day challenges and needs of the business community by making laws simpler and more flexible, as redundant and rigid labour laws will continue to be a deterrent for a constructive business environment. The amendments proposed by CPPR purport to make the implementation and enforcement of the Act more effective and transparent, taking a promotional approach that reaches out to the business community to make it aware of the provisions in the labour laws and ensuring compliance. CPPR intends to stir the mindset of the society, bureaucrats and the state to bring a change in the status quo and vouches that infrastructure and public transportation needs to be improved, rather than limiting the freedom of the citizens and market by law.

The draft of the proposed amendments to the Kerala Shops and Commercial Establishments Act, 1960, was submitted to the Government of Kerala on March 19, 2018. Mr A Alexander IAS, Labour Commissioner of Kerala, received the draft from Dr D Dhanuraj (Chairperson, CPPR).

Key Amendments Proposed to the Act: