‘China Not for Conflict With Neighbours’, Indian Express, 11th August 2015

Meet on Vytilla Hub to focus on funding mode, The Hindu; August 11th 2015

Meet on Vytilla Hub to focus on funding mode 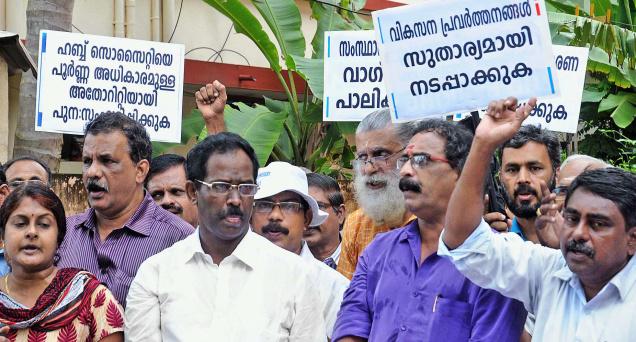 A march taken out to the office of Vyttila Mobility Hub Society on Monday by members of EDRAAC, merchant bodies, and NGOs seeking the State government’s attention to development prospects of the hub.

With public-private participation the ‘dominant option’ doing the rounds for the Rs 430-crore second phase development works of Vyttila Mobility Hub (VMH), Wednesday’s executive committee meeting of VMH Society is expected to take a call on minimising government funding for the project.

The meeting that is being held after a gap of about 16 months will be chaired by Chief Secretary Jiji Thomson. The participants would decide the percentage-wise investment by State government and private stakeholders.

An earlier proposal to scale down second phase development works too might be considered, considering all-round demand to scale down commercial activity and to focus on bettering connectivity among different modes of public-transport – buses, metro and ferries, official sources said.

“The meeting will discuss threadbare ways to implement the second phase and different funding options within the PPP mode. Clarity sought by Planning Board, Finance Department and Local Self Government Department on funding and other aspects too will be discussed.”

Integrating the hub with the upcoming metro station on the premises and also with the flyover expected at Vytilla too will be discussed.

The focus will be on inter-departmental cooperation to ensure optimal use of the 25-acre premises for public good. Ancilliary issues like rashly-driven buses causing accidents in the hub too will figure in the discussions, they said.

Speaking on concerns about delay in kicking off second phase development works, D. Dhanuraj, Chairman of Centre for Public Policy Research (CPPR) that spearheaded the concept of multi-modal mobility hub at Vyttilla said that care should be taken to prevent the hub becoming just another bus terminal. In the backdrop of concerns about prime government land abutting the backwaters falling into hands of commercial and real-estate groups, around 300 people organised a march to VMH Society office on Monday, demanding augmentation of infrastructure for commuters. “The second phase could have been realised if Government seat apart Rs 6 crore each year in the budget.”