Study on Autorickshaws and Paratransit systems in Chennai

The approximate loss incurred by thousands of motorists and commuters who used an ill-maintained road has been quantified by a city-based NGO.

Through its project ‘Taking X-Rays of Roads’, Centre for Public Policy Research undertook a detailed study of the the Palarivattom-Kakkanad Road — a major road corridor that connects the city with the Collectorate.

Global Positioning System and Android applications were used to study parameters such as fuel wastage, its cost, subsequent increase in pollution and loss of man hours, said sources in the agency.

Loss incurred by way of fuel wastage, wear and tear of vehicles, increase in commuting time and rise in traffic snarls/accidents has also been quantified.

The Public Works Department had awarded a contract of Rs.10 crore to resurface the Palarivattom-Kakkanad Road. However, the contractor abandoned the work. The PWD’s ineptitude in speeding up the work meant road users’ pockets were further dented.

The survey found that the average speed of vehicles in the stretch fell to 19 km per hour from 30 km per hour. This speed is considered “very uneconomical” as per international standards (AASHTO Road Standards).

‘Forced stops’ due to presence potholes and rough road surfaces on the stretch increased fuel consumption of vehicles, especially of heavy vehicles like buses. Thus, expenditure on fuel by vehicles covering the stretch worked out to Rs.5,87, 672 per day as against the approximately Rs.2,72, 000 prior to the commencement of road repairs.

This led to increase in pollution levels and added to the total loss to the economy.

Other factors such as maintenance cost for wheel alignment and tyre puncture further increased the financial burden on commuters.

Motoring down the road also increased the emission of noxious gases from vehicles. It is well known that halving of speed increases the emission of Carbon Monoxide (CO) by over 25 per cent.

The study also found that the total loss in time for a commuter who crossed the stretch was 20 minutes. This later increased from 25 minutes to 45 minutes.

Considering that the average daily wage in Kochi is Rs.500, the cost of total man hours lost worked out to Rs.60,000 per day. 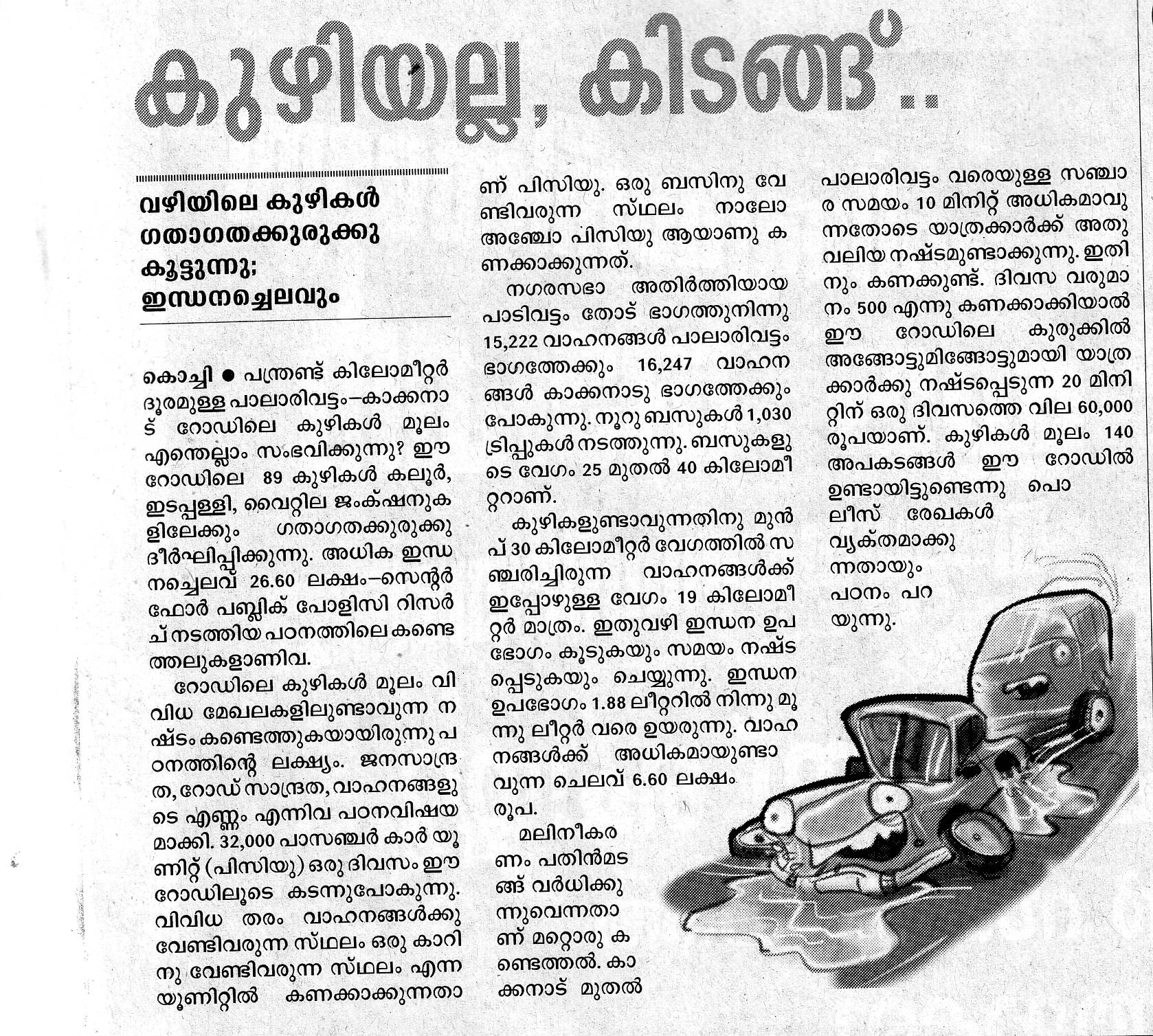