Can I grow a forest- No says the state!!

Salute to our patron and Living Legend Justice V.R Krishna Iyer on his 100th Birthday

CPPR and its dispute resolution wing, ADR Centre salutes Former Justice V.R Krishna Iyer, the living legend on his 100th Birthday. Justice V.R Krishna Iyer was a real crusader of justice for the downtrodden and gave significant contributions to the society as Legislator/Politician, Judge and eminent legal luminary. CPPR’s association with the legend goes back to the Research works undertaken for supporting the first documentary covering his illustrious journey as Lawyer in Kerala and playing a significant role in the policy making process as Minister of law, power, prisons, irrigation and social welfare in the Government of Kerala. He became a Judge of the Supreme Court of India which transformed his stature through his intervention and judicial activism. His judgments are a treasure trove of information which make law students and lawyers admire his erudition. 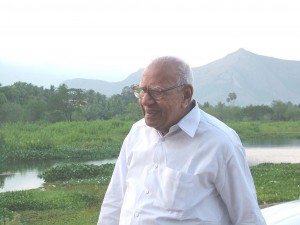 Justice Iyer inspired CPPR to establish Alternative Dispute Resolution (ADR Centre) in Kochi in 2009 aimed at assisting people to settle their disputes amicably.  On the inaugural day, Justice Iyer remarked that this will begin a “National Movement of ADR” in India. CPPR and ADR Centre has been able to bring relief to many people in the last five years thanks to his inspiration.

We thank him for his immense role and contribution to public policy and helping improve the lives of many in the society. Let his journey continue!!