India’s education system has undergone several reforms since independence. Literacy rates which roughly reflect these changes have increased from below 20 per cent in 1951 to approximately 74 per cent in 2011. However, the implementation of these reforms have been challenged at various levels. Although programmes as large as the Sarva Shiksha Abhiyan for universal primary education as well as the Right of Children to Free and Compulsory Education Act (2009) were enacted, the structural constraints in the political economy of India have delayed its proper implementation. For instance child labour still haunts the theme of universal education for children below 14 years of age. Another observation is that while net enrolment ratio in primary school level is close to 98 per cent for male and female students, the net attendance ratio is much lesser at approximately 82 per cent for male and female combined. The net attendance ratio in secondary school participation falls much below at 55 per cent for male and female students combined. This indicates that the policy of universal education has not been able to attract and sustain students for completing their primary and secondary education requirements.[1]Considering our significantly increasing population, India has reached a point whereby any delay in developing an efficient education system is likely to affect the demographic dividend that we currently enjoy. While we have fared well in increasing our literacy levels, the rate of educated unemployment has been slowly increasing alongside it. An estimate by Alakh N. Sharma of the Institute of Human Development (IHD) New Delhi says that one third of our total unemployed people hold graduate degrees.[2] This is a cause of concern due to the fact that India is projected to be the youngest country with approximately 64 per cent of its population going to be in the working age group by 2020. The population in the age group 15-34 is a staggering 430 million in 2011.

Have our policies in education been accommodative to these concerns? It is pejorative to judge the system based on the literacy levels alone. However, it is definitely worthwhile to look at the educational policies followed at least by those states currently at the lower rungs of literacy levels. In these series of articles we have attempted to identify some inherent policy vacuums and results affecting the higher education system in India. There is a deep contrast in how the federal government has followed the policy of educational reforms. The knots which has tangled the primary level education seems to have been easily untied at the higher levels. While educational institutions are meant to be registered as not-for-profit organizations, there is a proliferation of cronies and politicians flocking to hold key positions in this sector. Before we examine specific issues with the growing number of private universities, Table 1 gives a quick glance on the number of colleges recognized by the UGC across states in India. These colleges constitute the first steps towards higher education in India. 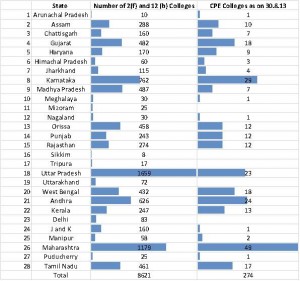 What we see in table 1 is that out of the 8000 plus colleges in our country recognized by the UGC only 274 or less that 4 per cent of the colleges are considered by the UGC as having a potential for excellence. Among all states selected states like Kerala, Arunachal Pradesh, Haryana and Himachal have at least 5 per cent of their education institutions as CPEs. Although the mandated target of the UGC is to focus on 3 per cent of the colleges in individual states and union territories, proliferation of colleges in the first place leads to questions on such mandatory conditions. There is a huge gap between what the UGC can support and what it has in front of it.

Table 2 shows one such disparity in the manner in which policies influence higher education. The states shown in the table are those which have private universities enacted through state legislations. These universities are supposed to cater to the youth pursuing higher education in the country. Out of these twenty states at least 13 have relatively low literacy rates compared to the rest of India. Out of these 13, Rajasthan and Uttar Pradesh (UP) are noteworthy. They rank 29th and 33rd with respect to the literacy levels achieved, roughly indicating the status of primary and secondary education levels in these states. However, when we examine the number of universities and colleges in these states we are presented by a contrasting picture. These states together account for close to 30 per cent of the private universities in the country and approximately 33 per cent of the UGC recognized colleges in the country.

A contrasting observation is that only two of the top 10 states as far as literacy levels are concerned feature in this list of states which have private universities in them. While the list is conspicuous with the absence of south Indian states and Kerala in particular, it is also indicative of the wrong turn that the educational apparatus of the country is following. If we take the specific case of Uttar Pradesh, we find that in all the 21 private universities in the state, 7 of them have politicians with active stake in the management while seven others have businessmen holding key positions. In at least one of these universities, the vice chancellor and his relatives have been accused of rape and murder of one of their students. For all the curiosity that our growing literacy levels indicate these are some of the harsh realities that we need to face with our system in future. What needs to be explored is why such a situation, where higher educational institutions are increasingly infested by cronyism, is continuing unabated in the educational system of our country? A better alternative is longed for. We shall continue to understand and explore this system in the forthcoming issue.

[3]This is a target scheme of the UGC to select colleges based on several criteria which have excelled in teaching research and extension activities. These colleges are funded by the UGC to improve and strengthen its infrastructure with the aim of furthering its potentials. The UGC criteria is to target 3 per cent of the colleges in each state and union territory with strong eligibility requirements.