An Account of the Woes of the Indian Educator! (PART 2) 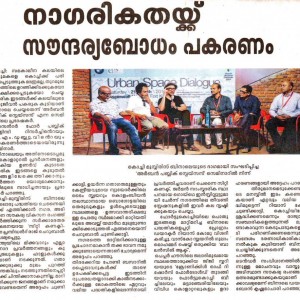 Kochi, Mar 23: The Kochi Muziris Biennale (KMB) has not only brought cutting-edge contemporary art to Kochi, but helped revive this once-buzzing port town by infusing its sleepy and discarded urban spaces with new life through art, according to a seminar held as part of the festival here.

Apart from the recent strides through the biennale and its offshoot collateral projects, more efforts are on to convert cityscapes into people and activity-friendly centres, speakers noted at the ‘Urban Public Spaces’ session held in association with Kochi-based think-tank Centre for Public Policy Research and German automobile giant BMW.

“Bring a project like the KMB to Chennai,” said Raj Cherubal, president of Chennai City Connect, an NGO that looks into urban infrastructure management at the event organised last weekend as part of KMB’14 Let’s Talk seminar series. “Most gatherings and fun activities in India happen indoors; the thinking now is that we do not have the space to do anything outside because of traffic. The first step is to get people thinking differently.”

Cherubal pointed out how centrally-located and traffic-heavy places like Times Square in New York and streets in Colombian capital Bogota were being converted into festive public spaces, pushing up real estate value. “The question is, do we have the imagination to inspire change in the city,” he asked.

Chennai City Connect is working on one of the biggest pedestrian projects in the world in bustling Pondy Bazar, providing plans for wasted spaces under flyovers. They have worked in collaboration with German cultural Goethe Institute to create art in the city’s train stations.

KMB’14 Director of Programmes Riyas Komu pointed out how several biennale projects have used and blended effortlessly into Fort Kochi’s public spaces, such as Gulammohammed Sheikh’s ‘Balancing Act’, which is in Vasco Square, or even Gigi Scaria’s ‘Chronicles of the Shores Foretold’ in waterfront space at Pepper House, apart from several collateral projects in Fort Kochi beach and in Mattancherry.

“The struggle is to find space in the minds of decision makers,” said Komu. “The biennale has sent a message to administrators that they have to look at Kochi and consider its vulnerabilities because international visitors are coming here.”

Biennale director Bose Krishnamachari noted that we need to get rid of the tender system and invite competition in architectural and infrastructural projects. “Bureaucracy makes us move at snail’s pace,” he said. “Today, authorities and students are lack aesthetics. We should appoint expertise in every field. Every individual has a responsibility to maintain and respect history.”

Kochi: As curtains fall on the second edition of the Kochi-Muziris Biennale, organisers and art aficionados are confident that the international exhibition of contemporary art is here to stay, even without government aid.

The biennale cost about Rs 17 crore, slightly up from the Rs 16.5 crore spent on the first edition. The Kerala government’s contribution fell to Rs 3 crore from Rs 9 crore despite pleas for financial assistance that fell on deaf ears. The rest of the money came from sponsorship and online crowd funding.

The success story of the biennale also underscores the government’s apathy towards an event that has grown to be the state’s pride in national and international art circuits. The government failed to cash in on the biennale that has given a much-needed thrust to the stagnating tourism sector.

The financials of the second biennale proves that the show would go on in spite of any hindrance. It is time to assess the initial two biennales. Organisers have promised to put out a white paper before the third edition starts. They also said they want to raise several questions to their detractors.

The first biennale witnessed active participation from the state government. The LDF government granted it Rs 5 crore and the successive UDF government another Rs 4 crore. Though the government had offered all help to the event, it ended up granting only Rs 3 crore this time.

These telling figures reflect a larger reality. When the government shied away from supporting a popular event, private entrepreneurs pitched in. So did ordinary citizens through their collective online contribution.

When the organisers prepare for the next biennale after two years, they may not want to rely on government contribution. The event has grown beyond that stage.

Almost four lakh people visited the first biennale. This time the number of visitors grew to five lakhs. The fame is so great that almost 10 lakh visitors are expected two years later. The government has shut itself out of such a popular event that is growing faster than anyone expected.

Organisers, however, have a request to the government. Art should be made a part of the curriculum in Kerala’s schools, Biennale Foundation secretary Riyas Komu told Manorama Online. He added that the foundation would submit a proposal to this effect.

Gandhi has said that children should be taught to draw before they learn to write. High time our government gave art the relevance it deserves, Komu said.

He also said that the artists who opposed the biennale have to answer the questions put forth by the organisers.

Artist Shibu Natesan, a prominent critic of biennale, said that biennale was just a marketing event for the western art and it does nothing to promote Kerala’s indigenous art forms.

Komu refutes the argument, saying Natesan has not visited biennale so far.

According to Creative Brands Editor-in-chief K G Sreenivas, it is needless to say that the assumption or argument that art is only about money and market is fundamentally flawed. However, he said, to assume that art production needn’t be connected with the market is equally flawed.

“And why western markets alone? Shouldn’t artists, too, as much as others, have a decent livelihood and not left to starve or languish in anonymity? Now as far as the biennale is concerned, look at the kind of exposure an artist gets whether she seeks it or not — and that is the nature of the beast. So what if her work is picked up by western buyers? Now, how do you define art works ‘made’ for western markets, or art production driven by modes of western fetish?,” Sreenivas asks.

He went on to cite the example of how many people frowned upon what has been called the occasional ‘exoticisation’ in Indian writing in English aimed at the western market. “While there may be some merit in the argument, one cannot entirely write off good writing or good art. It is not to suggest, however, that Indian artists or writers draw both market and critical legitimacy via media of the West though it is often, and regrettably, the case that a work, be it book or art, is applauded once it is either published or brought out in the west.”