“Possibility of Left and Congress coalition in Kerala” Kalakaumudi 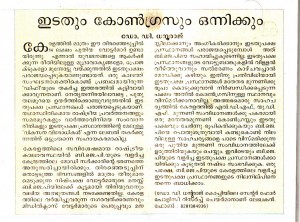 “There is a possibility of Left and Congress coalition in Kerala” says Dr D Dhanuraj, Chairman, CPPR in an article published in ‘Kalakaumudi’ one of the leading weekly in Malayalam. With the Left getting a severe hammering in the Lok Sabha polls, the leadership of Kerala unit has been undergoing an intense scrutiny. Even though odds were against the Congress led UDF, Left parties were not able to exploit the situation. Moreover, both the fronts together polled less than 18% this time and BJP alone scored more than 10 % of vote share in Kerala. It raises the alarms to the Left since it is perceived that BJP’s growth in Kerala would be at the expense of Left. It seems that Left has failed to cognize the urbanization and aspirations of middle class in Kerala while it languishes in the glory of the yesteryears. It has failed in engaging the youth by not able to attract them to a positive developmental framework of the information age.