Reproduction of Article from The Hindu on January 20, 2013

China is unlikely to go in for a violent conflict with India in the near future over the border disputes in Arunachal Pradesh and other regions, according to Alexander T.J. Lennon, an American expert on international security and editor-in-chief of The Washington Quarterly.

In a talk on ‘The real China threat,’ organised by the Centre for Public Policy Research, here, Mr. Lennon pointed out that China had to recently backed off from its territorial ambition in the South China Sea. 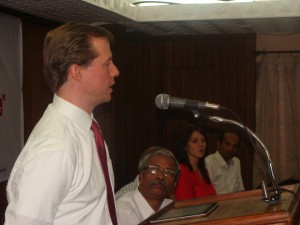 The assertiveness in the South China Sea and the confrontation with Japan had whipped up fears in China’s neighbours of its territorial ambitions and this would have negative fallout at a time when it was making its international influence felt.
Mr. Lennon said China was now focussed on becoming a major economic power rather than an emerging military power. It wanted to speed up its economic growth and spread its city-centric economic prosperity to the interiors. China had for the past few decades followed a `lie low’ policy in international affairs as it wanted to focus on its growth.

Economic goals
In the current inter-dependent globalised economy which China was part of, the country was less likely to go in for a violent conflict with India as it would derail China’s economic goals, Mr. Lennon reasoned.
It was hard to assess the real threat from China—to the US, India or other countries—because of the uncertainties about the outcome of the four transformations that China was undergoing.
These transformations related to a national economic model, global governance, foreign policy and new generation politicians. China’s rapid economic development was driven by export-led growth.
Now that export demand, especially from Europe, had shrunken China was now looking up to domestic consumption demand to back up growth. Again, after the 2008 economic recession in the US, China was looking for an alternative to the US dollar to park its massive global financial surplus as the country was scared of financial instability.

One alternative was to build its own currency as a stable international currency over the next generation.

Mr. Lennon said Chinese leaders were suspicious that the global governance instruments were being used by the Western powers to contain its might.
http://www.thehindu.com/todays-paper/tp-national/tp-kerala/china-unlikely-to-attack-india-says-us-expert/article4325297.ece