The National Investigation Agency and the Enrica Lexie case

The National Investigation Agency (NIA) was established by the NIA Act which was passed by the Indian Parliament in 2008. It is envisaged as an agency “to investigate and prosecute offences affecting the sovereignty, security and integrity of India”. However, there has been some ambiguity vis-à-vis the exact role of the agency, especially regarding the cases in which it is empowered to investigate into offences, in the backdrop of the Supreme Court of India approved of the Govt. of India’s decision to hand over the investigation into the Enrica Lexie case to the NIA vide an order dated 01-04-2013. However, before going into the details of the issue, it will be fruitful to look into Chapter III of the National Investigation Agency Act, 2008 which lays down the process to be followed in order to hand over an investigation to the NIA.

According to Section 6 of the NIA Act, a police officer, on the receipt of any information relating to the commission of an offence under any of the Acts mentioned in the schedule to the NIA Act and recording it as is required by Section 154 of the Code of Criminal Procedure, 1973, shall forward the report to the concerned State Government. The State Government shall then forward the report to the Central Government ‘as expeditiously as possible’. The Central Government will then consider, within fifteen days from the receipt of such report, on the basis of all the information at its disposal if it is a scheduled offence. If the Government is convinced of it being a scheduled offence and deems the case as being fit to be investigated by the NIA, then the case will be handed over to the agency. However, it is also pertinent to note that, according to Subsection 5 of Section 6 of the NIA Act, 2008, if the Central Government is of the opinion that a scheduled offence has been committed, it can suo motu direct the agency to investigate the offence. 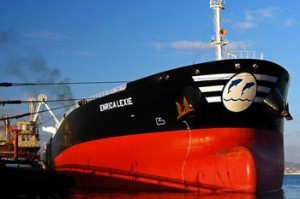 The responsibility of investigation of the Enrica Lexie case was handed over to the National Investigation Agency by the Ministry of Home Affairs vide order No. 111011/19/2013-IS.IV  dated 01-04-2013. The Italian govt. approached the Supreme Court questioning the jurisdiction of the NIA to investigate the case, saying that the case be handed over to the Central Bureau of Investigation (CBI). The Italian govt.’s case basically rested on the argument that the incident was not covered by any section of the The Suppression of Unlawful Acts Against Safety of Maritime Navigation and Fixed Platforms on Continental Shelf Act, 2002 (hereby referred to as the SUA Act). The Supreme Court, however, allowed the NIA to investigate the case. The cause for the Italian Government’s concern is that if the marines are found guilty under Section 3 of the SUA Act, then according to Section 3(g)(i) of the same act, they will be awarded the death penalty.

The Supreme Court of India, in its January 18, 2012 judgement, had held that although, the FIR could be lodged at the police station, that did not vest the state police with powers to investigate into the matter. Since, the shooting incident took place at a distance of 20.5 nautical miles from the baseline, in the contiguous zone of India, only the Union of India is entitled in law to take up the investigation. The reason that the Union of India cites for not handing over the case to the CBI and instead, to the NIA is the CBI being already overburdened with cases. Earlier, the Italian government’s decision to not send the marines back to India, after the Supreme Court of India had allowed them to return to Italy in February, 2013 for the national elections had escalated into a diplomatic row between the two countries. However, the Italian govt. later agreed to send the marines back to India after assurances from the side of the Indian govt. that they will not be arrested or awarded the death penalty. The tenability of such assurances made by the executive on a decision to be given by the judiciary is questionable. Such assurances notwithstanding, the NIA has charged the marines under section 3 of the SUA Act alongwith Sections 302 (murder), 307 (attempt to murder) and 427 (mischief) read with Section 34 (common intent) of the IPC. Whether the provisions of the SUA Act applies is a matter to be decided when the case comes for trial before the special court that has been setup to adjudicate the case and only time will tell.

* The author is an intern at CPPR and pursuing his graduation from National Law University, Delhi