What can the Defence Sector expect from 2017-18 Union Budget 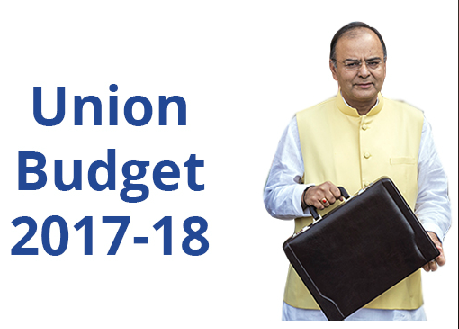 The Union Budget 2017–18 is unique in many ways. It will be the first budget after the unprecedented demonetisation and will be presented on the first working day of February. The assembly elections scheduled in five states also give a political angle to the budget, as the sops that will be announced could have an impact on the election outcomes. On the whole, the budget will look into the measures that the Government will adopt to salvage the economy from the damage caused by demonetisation.

It is an accepted fact that demonetisation has slowed down the fastest growing economy in the world. It has negatively affected the consumer and investor sentiments in the country. The consumers and investors became highly pessimistic, and everyone considers the upcoming budget as a tool to revive the economy.

But, will expansionary fiscal policy help the country to get out of the crisis or will it push the country into another serious crisis? What needs to be looked at is how the Government will stimulate the economy – by reducing taxes or by increasing expenditure.

Reduction in taxes raises the household’s disposable income. The increased disposable income can have an overall positive impact on the economy. If the Government is going for increased expenditure, it will be a challenge to finance the extra expenses. An increase in expenditure will widen the fiscal deficit gap, making it difficult for the Government to achieve its fiscal deficit target. It is mainly in this background that there is a call for the Government to set a range for fiscal deficit, like inflation targeting, rather than sticking to a number. Fiscal discipline is critical to the economy and any deviation from it can cause serious harm to the economy.

Huge deposits in the bank, post demonetisation, brought down interest rates and credit became cheaper. It was expected that cheaper credit facilities would attract private investors to avail loan facilities, which, in turn, would gear up the investment cycle in the country. But, if a loose monetary policy is accompanied with an expansionary fiscal policy, the outcome will be different.

Let us consider two major scenarios. The Government can print more money to meet its increased spending. Increased money supply in the economy can lead to inflation, which will lower the real value of government spending. Ultimately, the common man will suffer from the spiralling inflation rates. For example, if we analyse the trend of fiscal deficit in India, it can be seen that the country was moving towards fiscal consolidation till 2007–08. From 2008–09 onwards, it deviated from this path. The Lehman crisis of September 2008 is often cited as the reason behind the expansionary fiscal policy, as there was a need to revive the economy from the scars caused by the global financial crisis. But 2008–09 was also a pre-election year and many of the increased expenses occurred even before the crisis in the form of pay hikes, increased allocation for NREGA and subsidy hikes[i]. Thus, the fiscal deficit target for the year 2008–09 estimated at 2.5 per cent of GDP ended up at 6.1 per cent of GDP. The successive governments continued the expansionary fiscal policy even after the crisis, leading to high inflation rates and tightening of monetary policy. The result was a slowdown in investment and GDP growth. Graph 1 shows the movement of fiscal deficit and inflation rates in India over the last 10 years.

Another unintended consequence with regard to increased government spending is its impact on private investments. When the Government runs deficit, it meets part of its deficit by borrowing from the market. For instance, the total liability of the Central Government stands at 47.6 per cent of GDP. Total liabilities include both internal and external debt, with a share of 93.8 and 6.2 per cent, respectively. The high share of internal debt can be attributed to the rising fiscal deficit of the Government. In 2015–16, the net market borrowing through dated securities amounted to Rs 4,56,405 crore, which was budgeted to finance around 82 per cent of the gross fiscal deficit. It clearly shows that the Government greatly relies on the market for financing its rising deficit. The net market borrowing of the Government has increased by around 32 per cent (from Rs 3,45,010 crore in 2010–11 to Rs 4, 56,405 crore in 2015–16) during the last five years. Graph 2 shows the increasing trend of market borrowing by the Central Government. 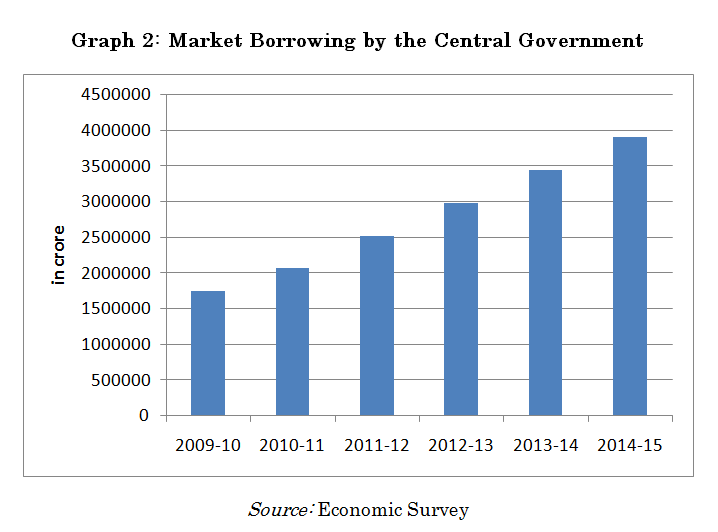 In order to fund its rising deficit, the Government issues bonds to mobilise resources from the market. The Government thus has to compete with private borrowers for funds from the market. As a result, interest rates rise and lead to crowding of private investments. This leads to a reduction in the fraction of output composed of private investments. Thus, fiscal stimulus can have an undesirable impact on the business climate in the country. Graph 3 shows the movement of interest rates on government dated securities. 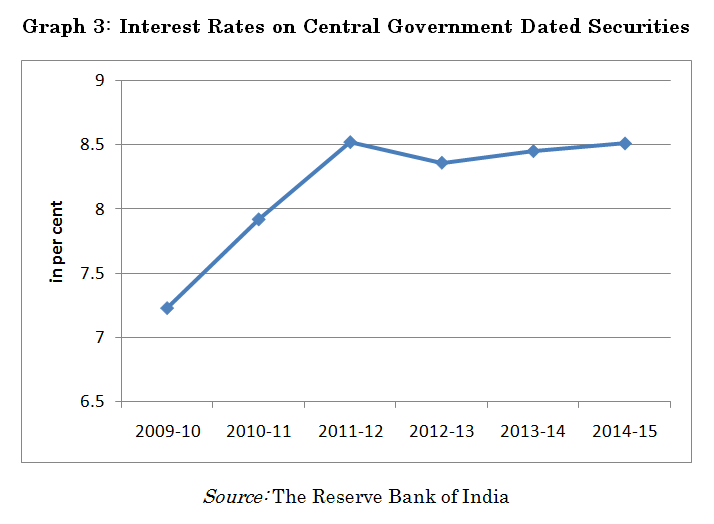 Market borrowing would add up to the total debt of the Government. It is a liability for the Government, as it needs to repay the amount in the future. Ultimately, the burden of Government debt will fall upon the taxpayers in the country. In total, the cost borne by the economy due to expansionary fiscal policy outweighs the benefits accruing from it.

The concept of deficit financing to stimulate the economy will only aggravate the crisis caused by demonetisation. Demonetisation has negatively affected the investment cycle in the country. The argument that lowering interest rates will help to revive the economy is not convincing. On the contrary, expansionary fiscal policy will only raise the cost of credit for private investors. Demonetisation and fiscal stimulus are a combination of two incompatible policies that can push the country into a major crisis.

*The author is Research Associate at CPPR-Centre for Comparative Studies. Views expressed by the author is personal and does not reflect that of CPPR.

Deepthi Mary Mathew is Senior Research Associate at the CPPR Centre for Comparative Studies. She has an MA in Economics from the University of Kerala and is also a PhD scholar at the Gokhale Institute of Economics. She can be contacted by email at deepthi@cppr.in or on Twitter @DeepthiMMathew