#CPPRWebinar on ‘Changing Political Dynamics in West Asia: Abraham Accords and Beyond’ 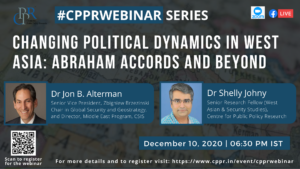 The Centre for Public Policy Research (CPPR) invites you to join us for CPPR Webinar on the topic ‘Changing Political Dynamics in West Asia: Abraham Accords and Beyond’ in the context of recent signing of peace deals, brokered by the USA, between Israel and the Arab nations.

Jon B Alterman is a senior vice president, holds the Zbigniew Brzezinski Chair in Global Security and Geostrategy, and is director of the Middle East Program at CSIS. Prior to joining CSIS in 2002, he served as a member of the Policy Planning Staff at the U.S. Department of State and as a special assistant to the assistant secretary of state for Near Eastern affairs, and from 2009-2019 he served as a member of the Chief of Naval Operations Executive Panel. In addition to his policy work, he often teaches Middle Eastern studies at the Johns Hopkins School of Advanced International Studies and the George Washington University. Earlier in his career, Alterman was a scholar at the U.S. Institute of Peace and at the Washington Institute for Near East Policy and a legislative aide to Senator Daniel P. Moynihan (D-NY) responsible for foreign policy and defense. From 1993 to 1997, Alterman was an award-winning teacher at Harvard University, where he received his Ph.D. in history.

Dr Shelly Johny is Assistant Professor of Political Science at St. Aloysius College, Elthuruth, Thrissur. He completed his Masters in International Relations at Middlesex University, London. He did his MPhil and PhD in West Asian Studies at Jawaharlal Nehru University, New Delhi. He has held research positions at the Centre for Air Power Studies, New Delhi which is a think tank of the Indian Air Force and the Institute for Defence Studies and Analysis (IDSA), New Delhi which is under the Ministry of Defence, Government of India. His research interests include contemporary West Asia with special emphasis on the Arab Gulf states, Iran, Iraq and Hezbollah and the Af-Pak region. Within these regions, the focus is on the nature and development of the on-going conflicts in these regions and the overall security and terrorism-related aspects. His other research interests include the nature of material and cultural exchanges between West Asia and South Asia in the early historical period through both overland and maritime routes.

#CPPRWebinar on ‘US Presidential Election 2020: Charting the Future of US-India Ties’

The Centre for Public Policy Research (CPPR) invites you to join us for CPPR Webinar on the topic ‘US Presidential Election 2020: Charting the Future of US-India Ties’ scheduled for October 22, 2020 (Thursday) at 6:30 PM IST.

The webinar organised by the CPPR-Centre for Strategic Studies shall explore the future of US-India ties in the context of the US Presidential elections 2020. The upcoming elections stand crucial for all nations as the new President who takes over the world’s most powerful office will set the tone of international relations. Our renowned speakers will address how election results will impact trade policies and the geopolitics between India and the US.

Richard M. Rossow holds Wadhwani Chair in U.S. India Policy Studies at The Center for Strategic and International Studies, Washington. As CSIS’ resident India scholar, Rossow helps frame and shape policies to promote greater business and economic engagement between the two countries and has also formerly served as the deputy director of the US-India Business Council.

Prof G Gopakumar
Prof Dr G Gopkaumar is former Vice Chancellor of the Central University of Kerala and former Head, Department of Political Science, Kerala University. A leading political scientist and psephologist, he specialises in the areas of International Relations, Comparative Politics and Indian Politics. He is also advisor to CPPR and has been one of the pioneers in the area of electoral studies in India.

Dr D Dhanuraj
Dr D Dhanuraj is the Chairman of Centre for Public Policy Research, India. A PhD holder in Science and Humanities and has worked extensively with the development sector in the capacity of public policy researcher. His areas of interest include; urbanisation, urban transport & infrastructure, education, health, livelihood, law, and election analysis.

#CPPRWebinar on ‘Changing Political Dynamics in West Asia: Abraham Accords and Beyond’

#CPPRWebinar on ‘US Presidential Election 2020: Charting the Future of US-India Ties’