ADIZ over South China Sea? China May not be Inclined

The Bullion Bust: A Baggage too Heavy?

Last week, a consignment addressed to the UAE Consulate in Thiruvananthapuram came under suspicion and was stopped by the Customs officials of the Thiruvananthapuram International Airport and seized 30 kg of gold being smuggled from the UAE. The gold was hidden inside various electrical equipment and devices in a package addressed to the UAE Consulate in Thiruvananthapuram. Usually, the consignments, luggage and parcels to the Consulates have diplomatic immunity and are easily released without much suspicion. In fact, the two kinds of objects of the diplomats that are exempted from inspection as per the Customs Act and Diplomatic Relations (Vienna Convention) Act are articles for official use and the personal baggage of a diplomatic agent. Under the Convention, the authorities in the receiving State cannot open a diplomatic bag even if they have suspicions about its contents. The bag can only be opened in the presence of embassy officials or diplomats of the sending State. In this case, the consignment was addressed to Rashed Khamis Ali Musaiqri Alshemeili, Charge d’affaires of the UAE Consulate situated at Manacaud in Thiruvananthapuram. However, the UAE Commission in New Delhi has condemned the misuse of diplomatic channels to smuggle gold to India and denied having any role in it. The investigations are on and the UAE officials in Thiruvananthapuram have promised their full cooperation with the Customs authorities.

The gold smuggling bust has created a political storm in Kerala which has been praised worldwide for its actions in containing the deadly viral outbreak. A senior IAS officer with the IT department has been removed from the post and a former official of the UAE Consulate in Thiruvananthapuram has been arrested for his involvement in the case.

This is not the first-time gold has been smuggled into the country. As per the reports by an international NGO, Canada-based IMPACT, India is one of the largest gold smuggling hubs in the world where gold is smuggled into the country from Gulf and Africa. The Commissionerate of Customs (Preventive) (CCP) had seized 540.37 kg of gold worth `187 cr in the State in fiscal year 2019–20. This was double the amount of 251 kg of gold seized in 2018–19. In 2019–20, as many as 802 cases had been registered by CCP in the State alone. Similarly, illegally smuggled gold has been seized from other states too.

Kerala is one of the largest consumers of gold in India. Buying gold is cheaper in Dubai even after the introduction of 5 per cent of Value Added Tax in the UAE. For instance, if one gram of 22 carat gold is priced ₹3,760 in India, its value in Dubai is ₹3,260 (168 Dirham). Approximately, 1,000 tonnes of gold is imported to India every year. One of the reasons for gold smuggling, which is very rampant in the country, is that gold purchases in India invites 12.5 per cent import duty and 3 per cent GST. This issue can be addressed by the harmonisation of taxes followed by an enhanced regulatory system at the border to filter out the falsified documentation.

According to the recent estimates, approximately 8,00,000 migrants from the State work in the UAE and while returning back to India, many of them are lured by the smugglers to smuggle gold into the country. Some reports suggest that around `20,000 and free travel tickets are given to migrants returning to India.

The smuggling of gold into the State has become a nuisance for the officials at major international airports in Kerala. The detectives with the Customs at Calicut airport seized as much as 232 kg of gold in the last financial year. At Thiruvananthapuram airport, which also falls under CCP, over 200 kg of gold was seized in the last financial year. On the contrary, Cochin airport that falls under the jurisdiction of Customs House, Cochin, the amount of gold seized in 2019–20 was estimated to be over 200 kg. However, Customs in Kochi is yet to officially publish the figures. Even the newly inaugurated Kannur International Airport (opened in 2019) has also seized 47.1 kg of gold last year.

India and the UAE share a very strong bilateral relationship which goes back decades. People-to-people connect between two countries (regions) has been there since the biblical times. The gold bust is a serious and unfortunate incident and the Indian authorities must be vigilant and also mindful to not risk the deep cultural and economic ties between the two countries. On the other hand, the UAE Consulate must put in a mechanism where only after due-diligence locals are recruited in order to put an end to such instances.

Views expressed are personal and need not reflect or represent the views of Centre for Public Policy Research. 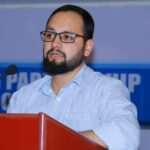 Gazi Hassan is Senior Research Associate at the CPPR Centre for Strategic Studies. His research covers areas on Asia-Pacific, particularly exploring the geopolitical dynamics, blue economy, developments related to trade and terrorism, role of various actors and security dynamics of the region. He has an MPhil in International Studies (Jamia Millia Islamia) and an MA in Peace Building and Conflict Analysis (Nelson Mandela Centre for Peace and Conflict Resolution, JMI). He can be contacted on email at [email protected] and on twitter @gazihassan

Gazi Hassan is Senior Research Associate at the CPPR Centre for Strategic Studies. His research covers areas on Asia-Pacific, particularly exploring the geopolitical dynamics, blue economy, developments related to trade and terrorism, role of various actors and security dynamics of the region. He has an MPhil in International Studies (Jamia Millia Islamia) and an MA in Peace Building and Conflict Analysis (Nelson Mandela Centre for Peace and Conflict Resolution, JMI). He can be contacted on email at [email protected] and on twitter @gazihassan
Gazi Hassan