Interaction with Students on: “Effective Public Policies for Effective Governance” 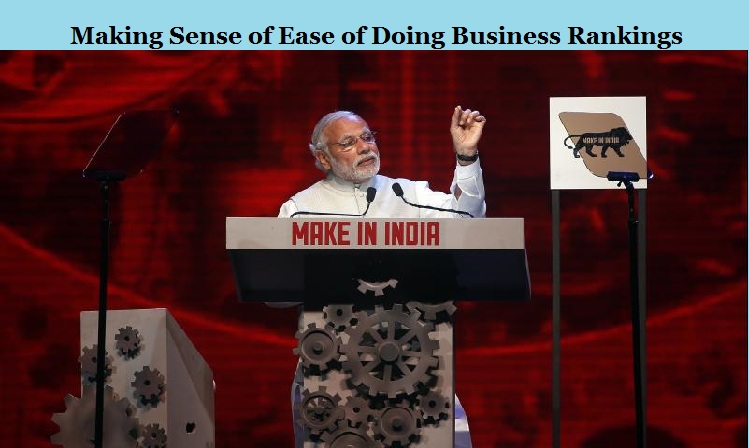 The latest of World Bank’s Ease of Doing Business (EoDB) Rankings has given a rude shock to the Government of India. It has belied the Centre’s year long efforts to improve things on the ground especially since it has been vigorously pushing States to adopt and implement 340-point reforms covering 10 areas. However, we need not react negatively as the report has dedicated columns highlighting India’s major reforms and encourages its endeavours to compete with and adopt international standards. The Government needs to understand that other countries, especially small countries, are also growing and have improve data rapid pace. The report mentions that 96 percent of economies in Europe and Central Asia have implemented atleast one reform and are doing so continuously. Further, indicative criteria related to tax and public procurements have been added, including, for the first time, a gender approach, one of the areas where India has a long way to go. Since the World Bank rankings are more of a relative measure than an absolute one, where India has scored better, the cause for concern should be addressed distinctly.

While the World Bank rankings takes into account Delhi and Mumbai, it should be noted that the performance of the states of Maharashtra and Delhi is inferior to many other states in the ongoing EoDB state rankings undertaken by the Department of Industrial Policy and Promotion (DIPP).Currently, the states are at 11th and 19th positions respectively with the state capital implementing less than half of the reform action points. A closer look shows that Delhi has also lagged behind in adopting a single window system for approvals/clearances and enabling implementation of labour reforms. These are key areas that influence the relative measures of the World Bank rankings and entrepreneurs’ choice to invest and decision to setup/expand shop. The Business Reforms Action Plan is definitely a good beginning, but should be a continuous affair that considers the concerns of industries and is proactive to the emerging issues. The World Bank index highlights this problem as it shows how important it is for the Government to look holistically on its role and functions. Studies shows that freer economies with strong rule of law and greater ease of doing business have prospered and this is not directly influenced by GDP growth. While the current Government has emphasised ‘minimum government and maximum governance’ slogan, it has not really translated into action. The Government needs to move forward in creating the right environment for businesses to operate, which will mean ‘less government’ in certain areas. Paul M Romer, Senior Economist and Vice President of The World Bank in his foreword to the report mentions‘smarter regulation’, which is intended to strike a balance between facilitating private sector while providing adequate safeguards to consumer/social group’s interests.

Raghuram Rajan, the former Governor of RBI has warned of the ‘Inspection Raj’ that has been distinctively bothering all forms of enterprises alike. Our analysis showed that 9 out of 10 retailers find inspections to be non-transparent, troublesome and unwanted, often forcing them to pay hefty bribes or face the wrath of the officers wielding penal powers. The current set of reforms has largely addressed the ‘License Raj’ by implementing and integrating online systems, reducing licensing norms and enabling information to be made public, but will need to standardise inspections to gain business confidence. Large enterprises have complained about the risks and unpredictability factors, which could be addressed only through a consistent policy adopted across all states. A single bureau acting as nodal agency for all compliances, investor support andassistance will require the legislative mandate to operate across different subject matters, since key areas like environment clearances and company compliances touch upon the Union List. This will be important as the Government moves from policing to regulation and will require local level monitoring.

The Mole in the Reforms

Given the sensitivity of the relations between the Government and Judiciary, EoDB got a mention in the recent NITI Ayog Arbitration Conference hosted by the Ministry of Law and Justice, asslow judicial system has been decelerating India’s quest for higher rankings. The Commercial Courts, Act have been a face saver, as the real reduction in pendency and litigation does not show visible signs of improvement. The Chief Justice of Indiahas mentioned how India has failed to have a good arbitration centre to handle commercial matters at a time when Indian companies are clogging Singapore and London dispute resolution centres. Very few courts has adopted a case management framework or considers treating commercial matters distinctively. The silent rift between the Government and Judiciary, if continued, will be disadvantageous to all sections of people.

While The Economist has chided India’s pursuit of rankings and records, the Government should not be bogged down and stop pursuing business reforms, rather it should carry forward the process of deregulation. What it needs to do is to involve all stakeholders in these processes. For instance, trade bodies could be given more responsibility in implementing various reforms. The American Chamber of Commerce vets companies and technically certifies them, thereby reducing the burden on the government. Even technical certifications could be handed over to such bodies through a transparent and meaningful process.

A major step towards any reform is identifying the major pain points affecting local industries. The state authorities should have regular consultations with entrepreneurs, industries and trade bodies to identify and prioritise the areas that need to be fixed and effectuated through amendments or government orders. The district industries centres located in various states which conduct business perception surveys area failure in this regard and need to be disbanded.

‘Doing business’ goes beyond regulations and legislative actions. Social factors also influence investments and decision making of entrepreneurs. A case in point is Bengaluru, which has emerged as the largest start up ecosystem in India, as it provides access to opportunities, education and health support. Liveability and human development parameters are interlinked with business ecosystems. The states cannot ignore them, if they want to build investments and industries. No number of government notifications or orders will help to build such an ecosystem where businesses and societies thrive together.

* Madhu Sivaraman is Director (Research and Projects) at Centre for Public Policy Research. Views expressed by the author is personal and does not represent that of CPPR.

This article was first published in Swarajya Magazine: Much To Be Eased Out For The Ease Of Doing Business

Madhu Sivaraman is a Research Scholar at CPPR.