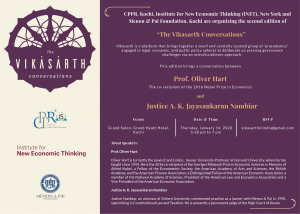 Centre for Public Policy Research, Kochi, Institute for New Economic Thinking (INET), New York and Menon & Pai Foundation, Kochi are organizing the second edition of “The Vikasarth Conversations”. Vikasarth is a platform that brings together a small and carefully curated group of ‘pracademics’ engaged in legal, economic, and public policy spheres to deliberate on pressing governance challenges via an interdisciplinary approach.

In this edition of “Vikasarth”, we host a conversation between Professor Oliver Hart and Justice A K Jayasankaran Nambiar on the path breaking work of Prof. Hart in the field of Contract Theory for which he was the co-recipient of The Nobel Prize in Economics (2016).

Prof Hart is currently Professor at Harvard University, where he has taught since 1993. He is the 2016 co-recipient of the Sveriges Riksbank Prize in Economic Sciences in Memory of Alfred Nobel.

Justice Nambiar commenced practice as a lawyer with M/s. Menon & Pai Advocates in 1990. Specialising in Constitutional Law and Taxation – Direct & Indirect, he is a Permanent Judge at the High Court of Kerala.

There is no registeration fee for the event