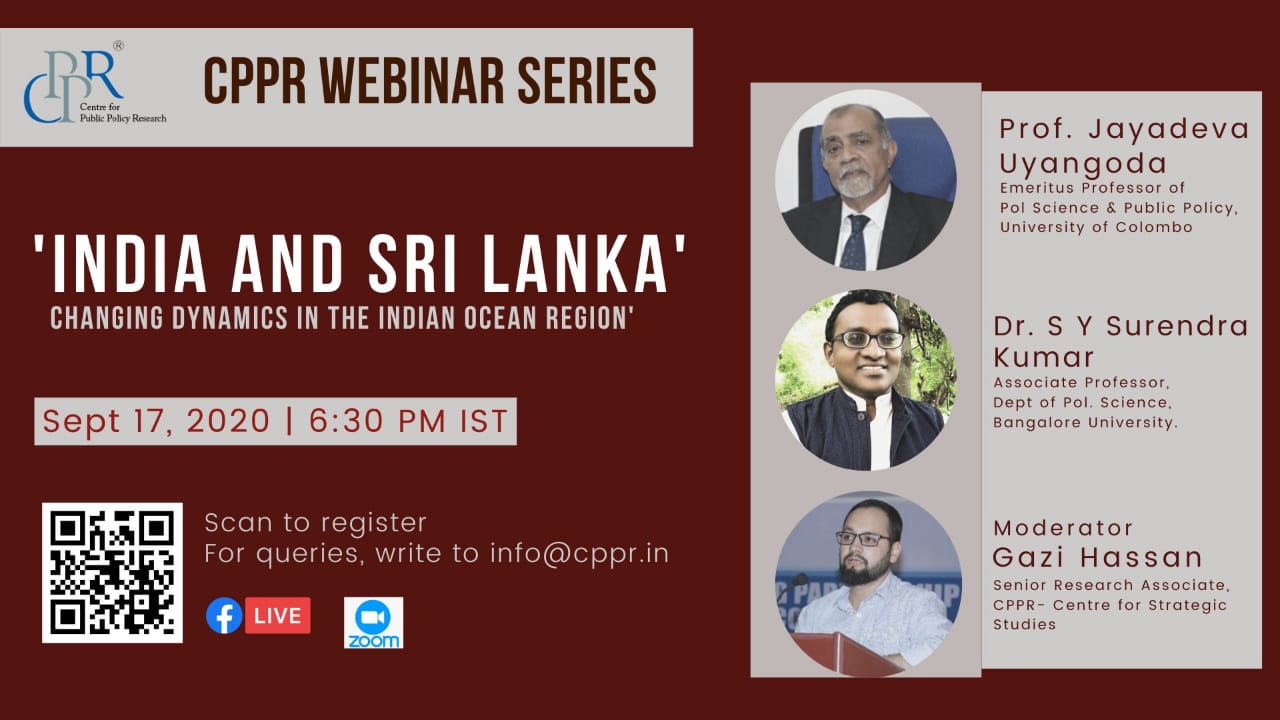 Centre for Public Policy Research (CPPR) will host a live Webinar on the topic ‘India and Sri Lanka- Changing Dynamics in the Indian Ocean Region’ on September 17, 2020 (Thursday) at 6:30 PM IST.

The webinar organised by the CPPR-Centre for Strategic Studies shall explore geopolitical dynamics and framework of India- Sri Lanka relations. The key points that will be discussed during the webinar are; Expectations from the new government in Colombo on the regional and global engagements; Sri Lankan economy and its impact on the infrastructure and development policies; The approaches of the new government towards ethnic, minority and human rights challenges. Sri Lanka- India relations and its vital role in the regional geostrategic framework in South Asia and the stability of the Indian Ocean Region.

Prof Uyangoda is a political scientist and a constitutional expert in Sri Lanka. He is a prolific writer whose works are widely used as key texts in the field of Political and Social Sciences in Sri Lanka. He has actively taken part in Sri Lanka’s Constitution building efforts and peace process of the late 1990s. He was the Founder-Editor and later co-editor of ‘Pravada’, an academic journal in English that focuses on Sri Lanka and South Asia.

Dr S Y Surendra Kumar has a number of research publications to his name and has been bestowed the MAHBUB-UL-HAQ Research Award on Non-Traditional Security Issues in South Asia. His areas of interest lie in South Asian Security, Indian Foreign Policy with reference to US and China, and Public Policy Studies.

Gazi Hassan is involved in research on Asia-Pacific, particularly exploring the geopolitical dynamics, blue economy, developments related to trade and terrorism, the role of various actors, and the security dynamics of the region. He has been a contributing author to various online platforms.